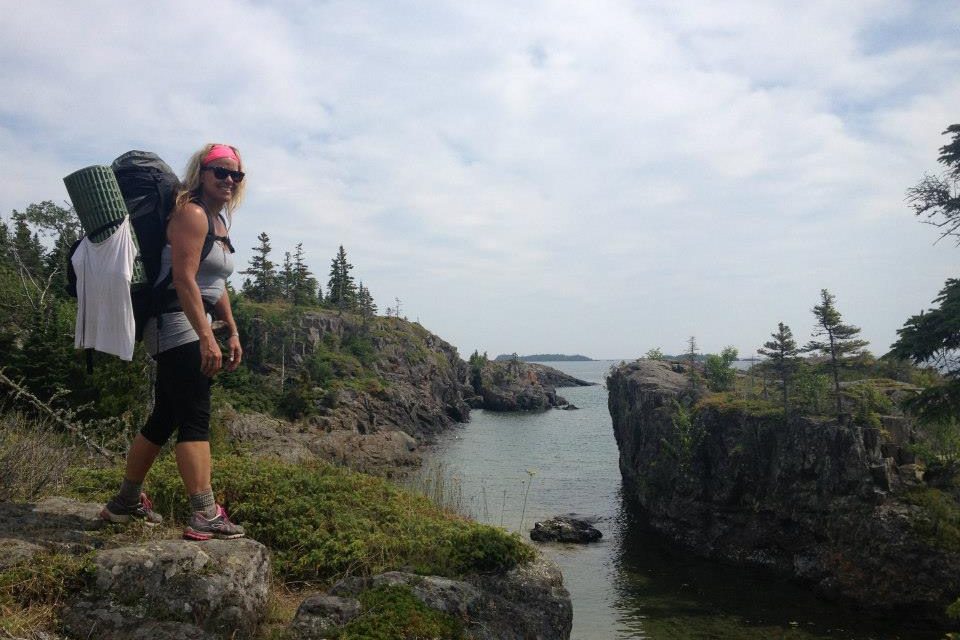 To see all of Jill’s posts, click her name above!

It was another doozy of a day. The 2+ mile hike from Lake Richie to Moskie Basin was a breeze — and I don’t think there’s a more gorgeous part of the island than Moskie Basin. Quiet, beautiful, windswept; I left my heart in Moskie Basin. The views were stunning: wild ducks of every sort, fresh breezes coming in off Lake Superior, even a mysterious fog bank. I wished we could’ve stayed but we had to make up time. So it was off on the trail back to Daisy Farm. 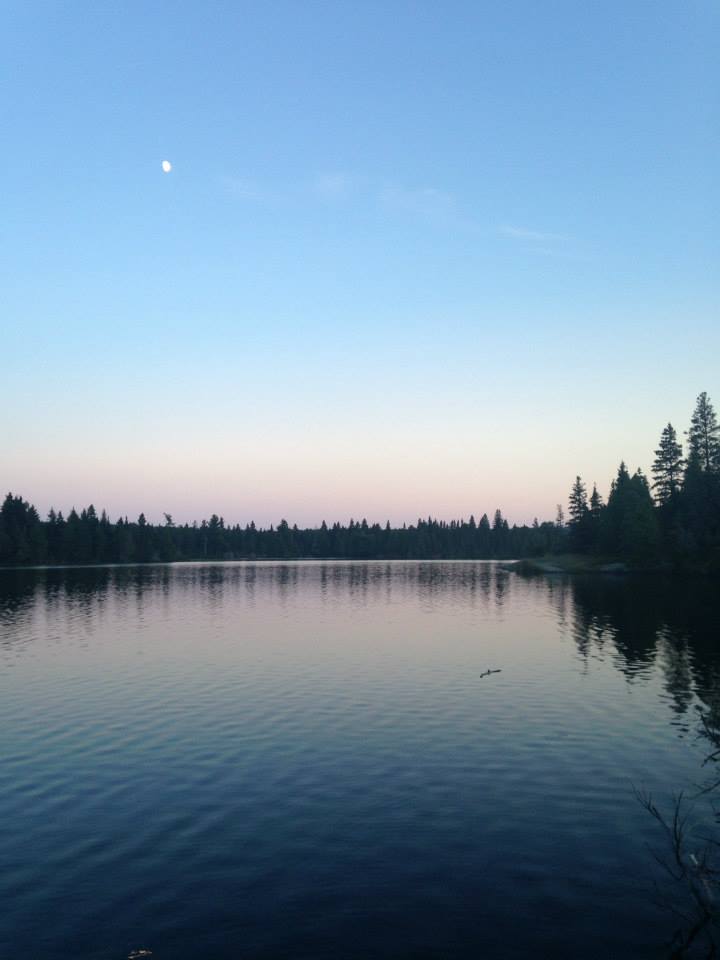 The weather was much cooler on this day — “like hiking in A/C,” which was a relief. Once we reached Daisy Farm, we spoke with a ranger who was just leaving on his boat. He told us that the weather was supposed to be good, and that the 4+ mile hike to 3 Mile was full of rocks and roots, but no big climbs or drops. The first part of the hike was ok, but the middle and end were brutal. I thought we’d never make it. My feet were tender and swollen and full of blisters (and I had TRAINED for months before I got to the island), and I was running out of moleskin and bandaids, along with everyone else. 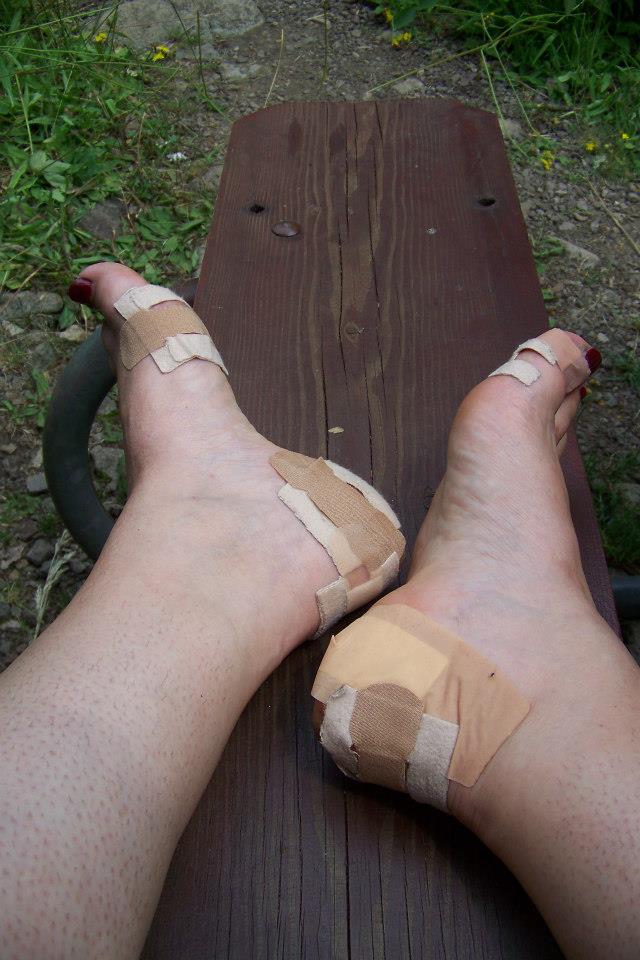 Once at Three Mile, we found a shelter back in the woods, and the mosquitos were terrible (they’d really not been that bad most of the trip, save for the hike from East Chickenbone to McCargo Cove). Donna made peach cobbler for everyone, which was delicious. After dinner (spaghetti with meat sauce washed down with the small bottle of wine I’d been saving, which like I said, was a bit of a disappointment) I went straight for my sleeping bag — I found that after hiking all day with people, I was ready for some alone time. I read some more of Naked in the Stream for about an hour, then drifted off to sleep to the sound of the loons. I woke up sometime in the middle of the night and heard the wolves again. I was pretty well rested at this point, but very comfortable on my awesome borrowed sleeping pad. Again, I just laid there in the darkness, listening to the sounds of the island. I was ready to be back in Rock Harbor the next day.

Donna ended up being the first to pack up camp and head for Rock Harbor, since she had some supplies she needed to get. Lia and I left next, since we tended to be early risers, and Sarah and Whitney after us. Laurel stayed behind to doctor up her feet — Laurel had the worst of it when it came to blisters. I was a little nervous about leaving her to hike alone, but given that we only had 3 miles to go that day, and she had her survival whistle, I decided it was safe.

The ranger at Daisy Farm had told us that the 3 Mile trail along Lake Superior was the toughest 3 miles on the island, so Lia and I opted to backtrack a bit, take the Mount Franklin cutoff back to the Tobin Harbor trail, which we’d hiked in on the first day. We were disappointed to find we missed the trail marker by a good mile, adding 2 miles extra on to our hike that day. Grrrr.

As we strode into Rock Harbor a little past noon, Donna was sitting on a bench, almost like she was waiting for us. We were so happy to be back to “civilization!” She had good news and bad news: good news was she’d snagged us a prime shelter, the bad news was that it looked like the ferry was going to be delayed a whole day due to gale force winds.

After dropping our packs at the shelter, Lia, Donna and I headed to the Greenstone Grill, the restaurant where we immediately downed our beers (they had three on draft!). We were slightly buzzed, happy to be off our feet and to have completed a pretty amazing adventure. We must have sat there for two hours, at the end of which a man who looked a lot like Sam Elliot gave us the remaining three pieces of his pizza, since he was leaving to head back to the mainland. We snatched the box from his hands with a quick shout of joy and started stuffing our faces. It was the best damn pizza I’d ever had. 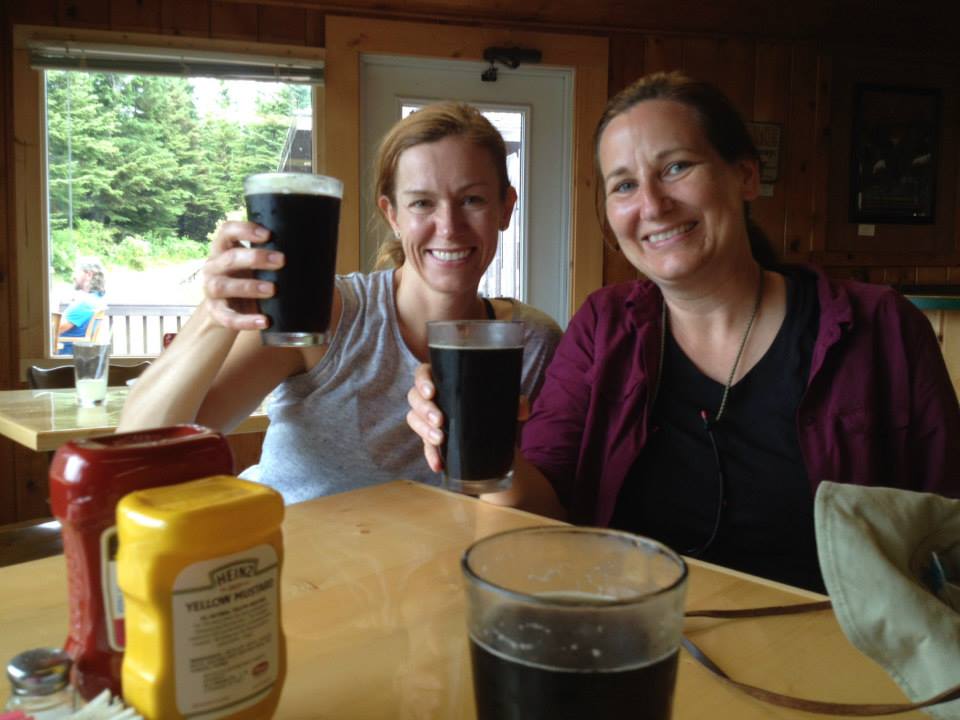 We left the restaurant, and as we were passing the first aid building, happened to hear Laurel’s voice inside. Her big toe had the biggest, nastiest blister I’d ever seen (or that the ranger had ever seen). Pretty soon Whitney and Sarah showed up to ogle the thing as well. The ranger was trying to decide whether to lance it or not (I’m not a medic, but that thing was so big and nasty, I couldn’t imagine leaving Laurel to hobble around on it for another couple days). We agreed to meet up at the restaurant in a few hours to have dinner together, after Laurel was finished at the first aid station. I bought tokens for a shower and a towel, and though a hot shower did feel good, I’d kept pretty clean using just baby wipes and lake swimming, so it wasn’t the pure relief I usually felt after several days backpacking.

After dinner, Laurel and Donna each bought a bottle of wine at the Rock Harbor store. Usually I enjoy wine enthusiastically whenever I can, but for some reason on Isle Royale it just didn’t appeal to me. Sarah and Whitney had met a couple of guys at the lodge who were very nice and a little wild looking (one had this big bushy beard) and ended up literally partying all night with them at the shelter next to us. There may or may not have been some angry words exchanged at 10pm. Whitney may or may not have spent the entire next day throwing up outside her tent. Only the moose will know.

Day 6: Bonus Day in Rock Harbor and a Moose Sighting

Donna and I rose at 6:30am to find out the status of the ferry, and to no one’s surprise, it was cancelled. As we were walking back from the bathrooms, Donna grabbed my arm and scream-whispered, “OH MY GOD LOOK!” Standing in the middle of the campground path, right next to the ranger housing, was a full sized bull moose. He turned and looked at us as we gaped, then moseyed (moose-yed?) off into the woods. We were so happy. We’d finally seen a moose. 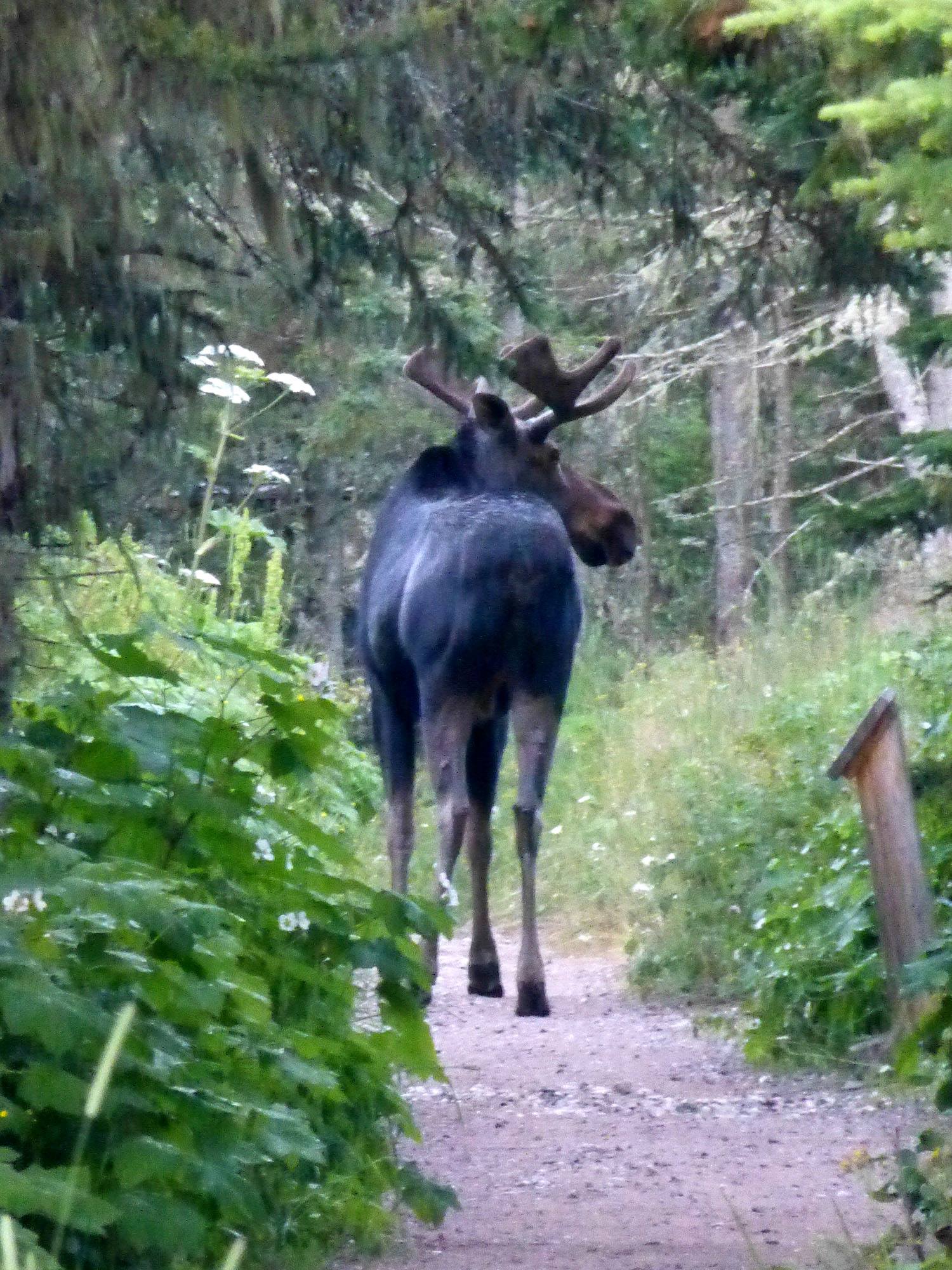 It was a gorgeous day (other than the wind), and frankly I wasn’t at all disappointed that we got to spend another day on the island. However, Lia and Laurel were both pretty miserable at that point. Lia hadn’t gotten any sleep, and Laurel’s feet were basically hamburger, so they decided to go in on a room together at the lodge.

Then this weird thing happened: Isle Royale became a little Lord of the Flies — the “guests” at the lodge seemed to become this elite group of aristocratic royalty, while the backpackers were seen as moochers and were shooed away with disgust by all the island staff. Then when it was announced that the other ferry to the island had run aground the night before, and wouldn’t be taking passengers the next day either, it was suddenly the wild west. There were people desperate to get off the island.

Donna, Sarah and I hiked out to Scoville point, perhaps the best hike on the island. It was wild, reminding me of Alaska or northern California. We didn’t have packs or a timeframe, so it was nice to enjoy the island without all the extra weight. 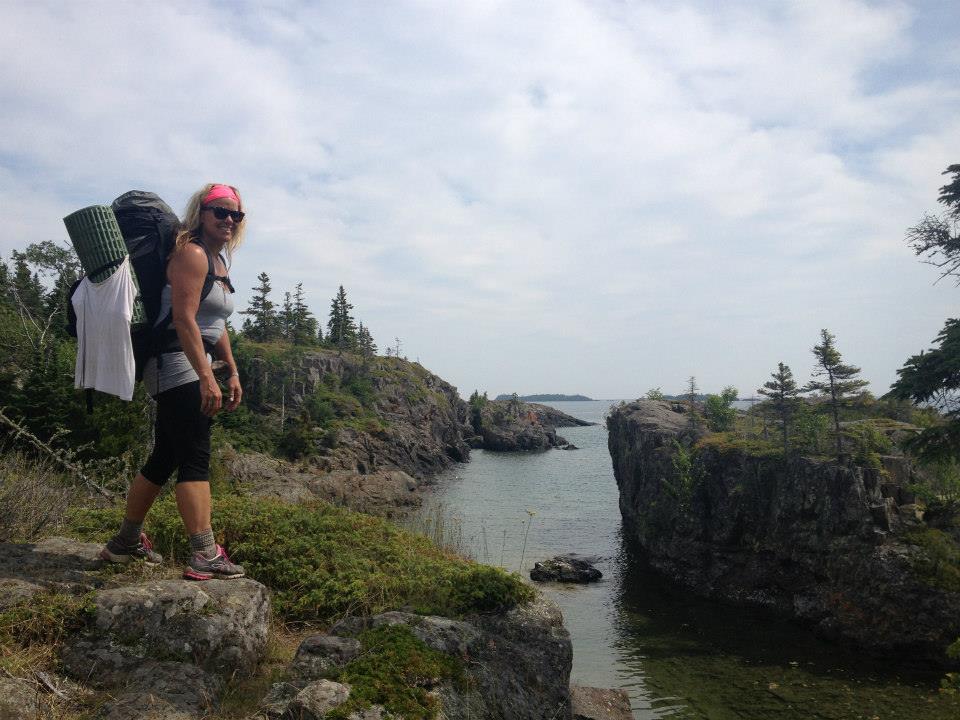 That last night on the island, I tried to soak up every minute I could of wildness. There was a slight chance that the ferry wouldn’t leave again, but it was pretty small. The next morning we got up, packed our stuff and headed down to the dock. After a couple hours of waiting, the captain finally made the decision that the boat would go — fully loaded. The rangers encouraged everyone to take sea sickness medication, which I did.

The ride back to Houghton was horrible. The swells made almost everyone sick, and there were plenty of adults and kids throwing up everywhere. I was pretty sick for the first half of the trip, but then I remembered Sarah had said something about an acupressure technique , and I was completely surprised (and happy) to find that it completely took away all my nausea. I even read my book for the rest of the journey, something that I’d never be able to do otherwise (I always get carsick, even when reading my phone).

As soon as we hit dry land, we were ready to pack up the car and head home. It was a long drive, one lit by a full moon. I think we were all pretty quiet during that ride, reflecting on our journey (and the friendships we’d developed along the way).

Everyone of us agreed we’d be back to Isle Royale, even Sarah, who claimed she had too many places on her bucket list to visit any place twice. I just hope that there are wolves there when we return.

[UPDATE: Wolves have returned, and I’m returning to the island with my husband in July 2019!] 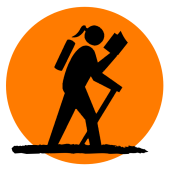 Wolfe is Chief Heroine of the Outdoor Book Club (http://www.outdoorbookclub.org/), and is an avid reader and outdoorswoman. She lives in Michigan with her five kids, two dogs and husband, working as a writer and public relations professor at Grand Valley State University. 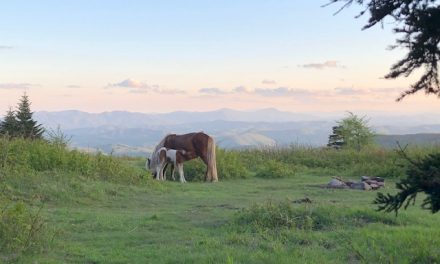 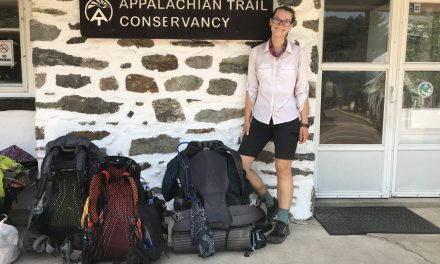 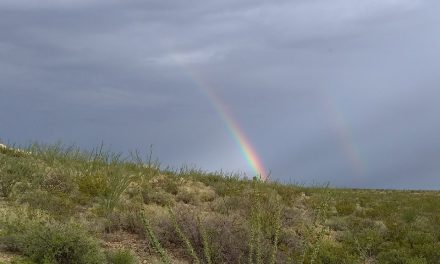 Day 2 on the CDT: Rain and Skeeters 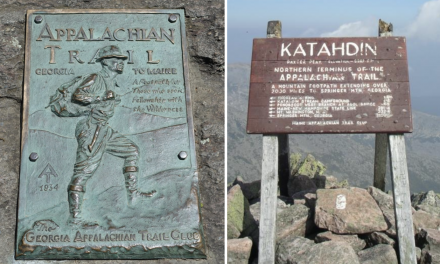 Flip-Flopping on a Flip-Flop