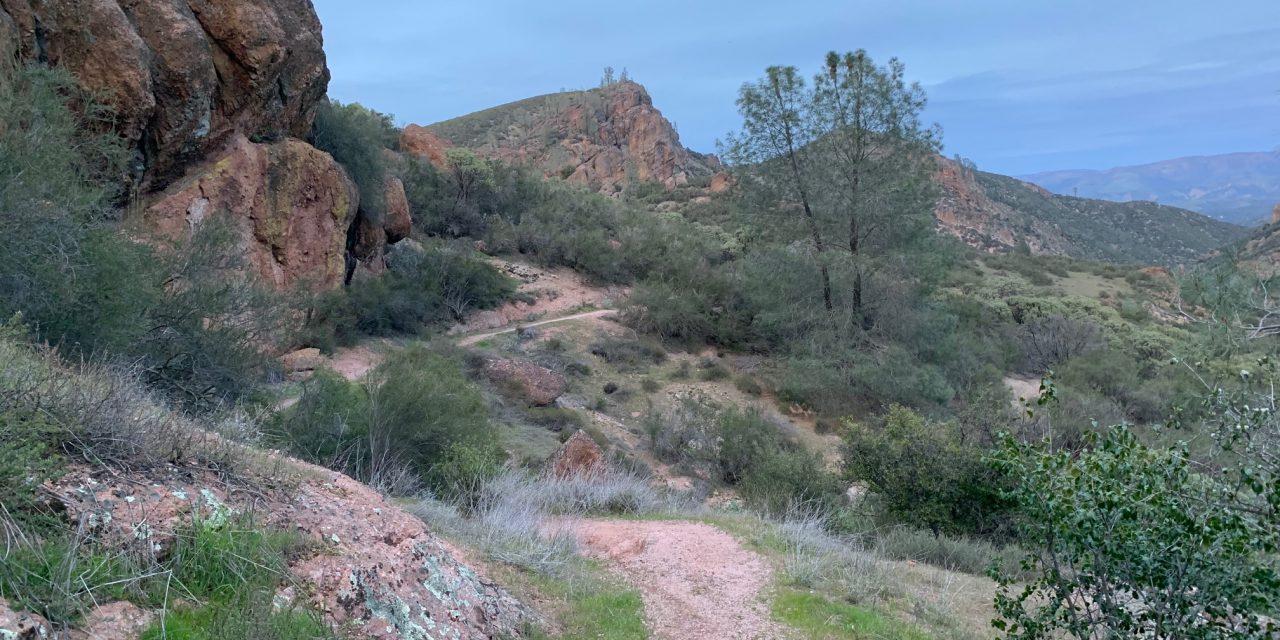 About the Author: Elizabeth “Steady” Sanders is an avid hiker/trail runner, backpacker, and world traveler. She resides in Mill Valley, California where she owns and operates a small horticultural business. Her main interests are environmental and indigenous studies, urban agriculture, and forever planning her next adventures. She has logged many miles in many countries, yet still dreams of wild places. Instagram: @shewalks_softly. You can see some of travel and hiking photos on Trover.

I should have known it was going to be a ‘Murphy’s Law’ kind of day.  I had really wanted this hike to happen and researched the route in depth. Right  down to the direction the wind would most likely come from towards the end of the day. However, here I was, leaving my house 2 hours later than I had planned. Already off to a rough start.

I drove the 2 hours (with traffic) from my house to the visitor center/campground store at Pinnacles National Park, arriving at 11am (eek!). I had a long day ahead of me, and though I was making an effort to stay positive, I had the first inkling of a bad hike.

I quickly showed my park pass to the park aide and took my parking receipt. On my way out of the door I asked her if she had any detailed maps of the wilderness areas surrounding the park. Nope… No dice. She recommended I stay on established trails within park boundaries. “Good advice”, I thought, but I did have an ok map and gps to guide my way…. And besides, I really wanted a wilderness hike. I decided to stick to my planned route. 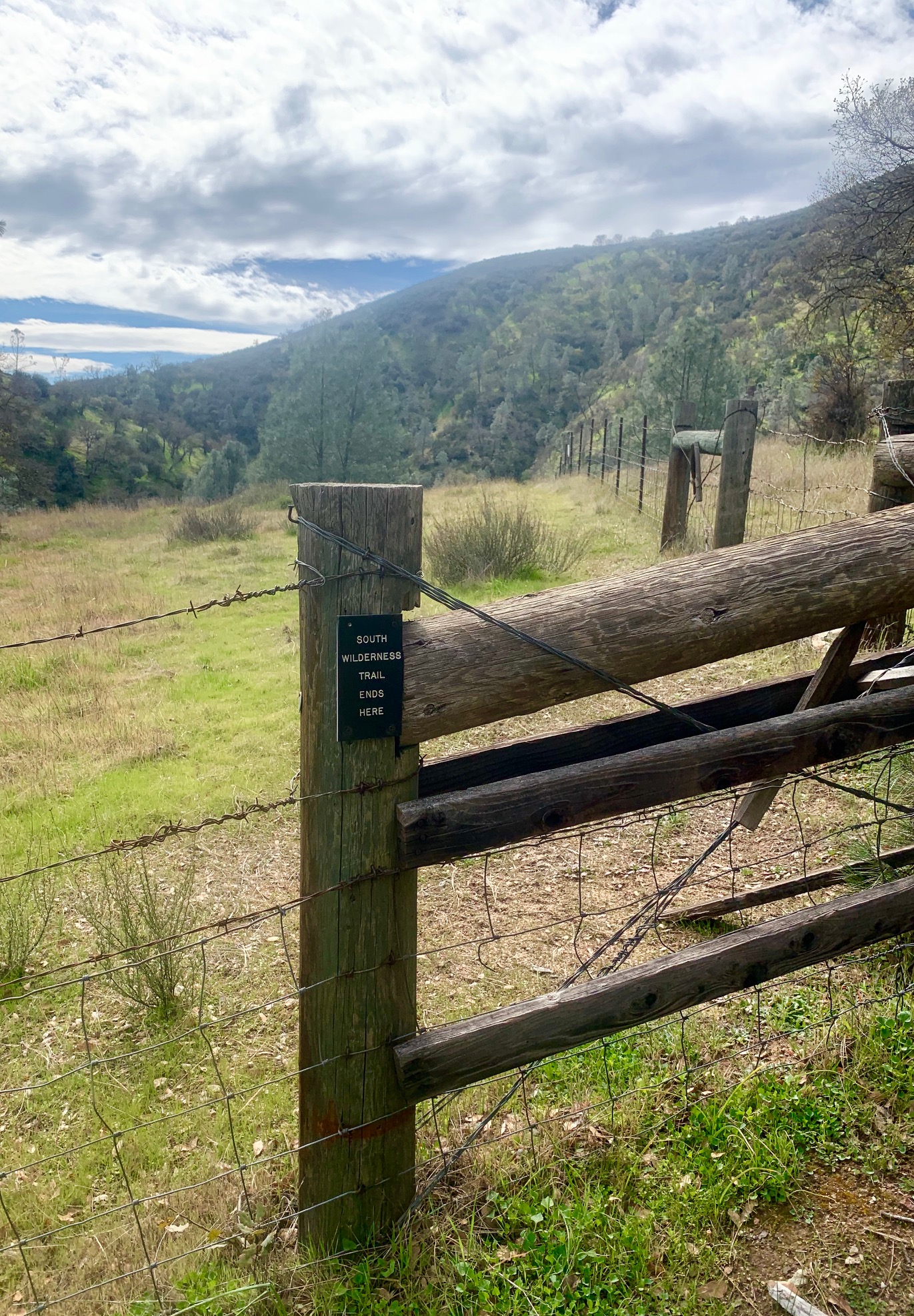 So off I went. I extended my hiking poles, adjusted the straps on my pack and proceeded to the Bench Trail. I’d gone this way many times to get to different parts of the park. The area fills me with good memories and a lovely familiarity every time I’m on it. I passed an older couple looking at some rocks and bid them “hello”. I was walking at a pretty fast clip in a vain effort to make up for lost time. A mile or so later I was at the turnoff for the South Wilderness Trail. This trail ambles along with slow inclines and declines along the bed of the Chalone Creek. The sound of the water was magnificent and seemed to take the edge off the rising temperature. I came up to my first creek crossing. “Not bad”, I thought. “Slosh”, said my boots as the chill of the water went up to my knees. The water was higher than the tops of my boots but I shrugged off the thought of hiking the remaining 13+ miles with wet feet. This is what I signed up for after all. I knew high water might be an issue this time of year. 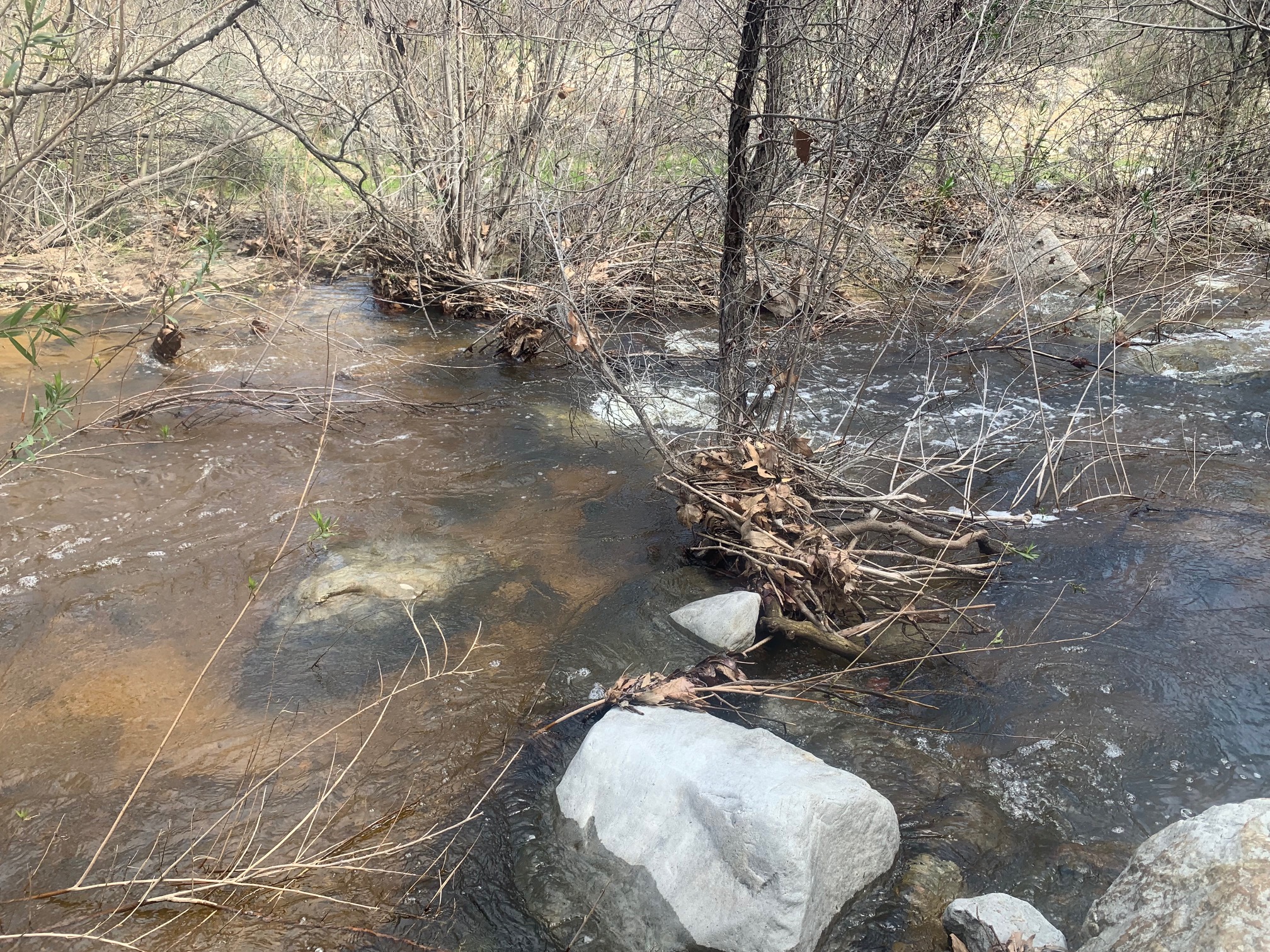 The creek was wider and deeper than it looks 🙁

I continued on at a decent pace.

A couple of miles in, I reached the end of the South Wilderness trail; which is well marked by a sign and a corresponding barbed wire fence meant to keep wild pigs outside of the national park boundaries. A quick look at the map reminded me to continue on to the right side of the fence line to start the connector trail towards the Chalone Peak trail. And so I did, while making note of some landmarks and noticing the trail was quickly getting much narrower.

I walked and walked following the boundary fence when I realize all of the sudden that the trail connector I’m on picks up on the opposite side of the fencing. Hmmm…no gate where I had hoped there would be one. The trail I wanted follows the valley and has amazing views of a high desert wash. But here I am, stuck by a fence that’s too high and tight for my short legs to safely cross. I don’t take a lot of extra risks when I hike alone. Besides, I’m not a rule breaker. I decided to follow the boundary fence hoping to find an opening so I can get myself back on track. I kept referencing my map… I’m not lost just a little off route. So I walk and walk and walk, hugging  the fence on a narrow little deer trail. Staring longingly to the to the creek as it meanders to the left and I to the right. “It’s ok”, I thought, “the map shows the boundary line intersecting with a tributary of Chalone creek. Maybe I can cross there”. 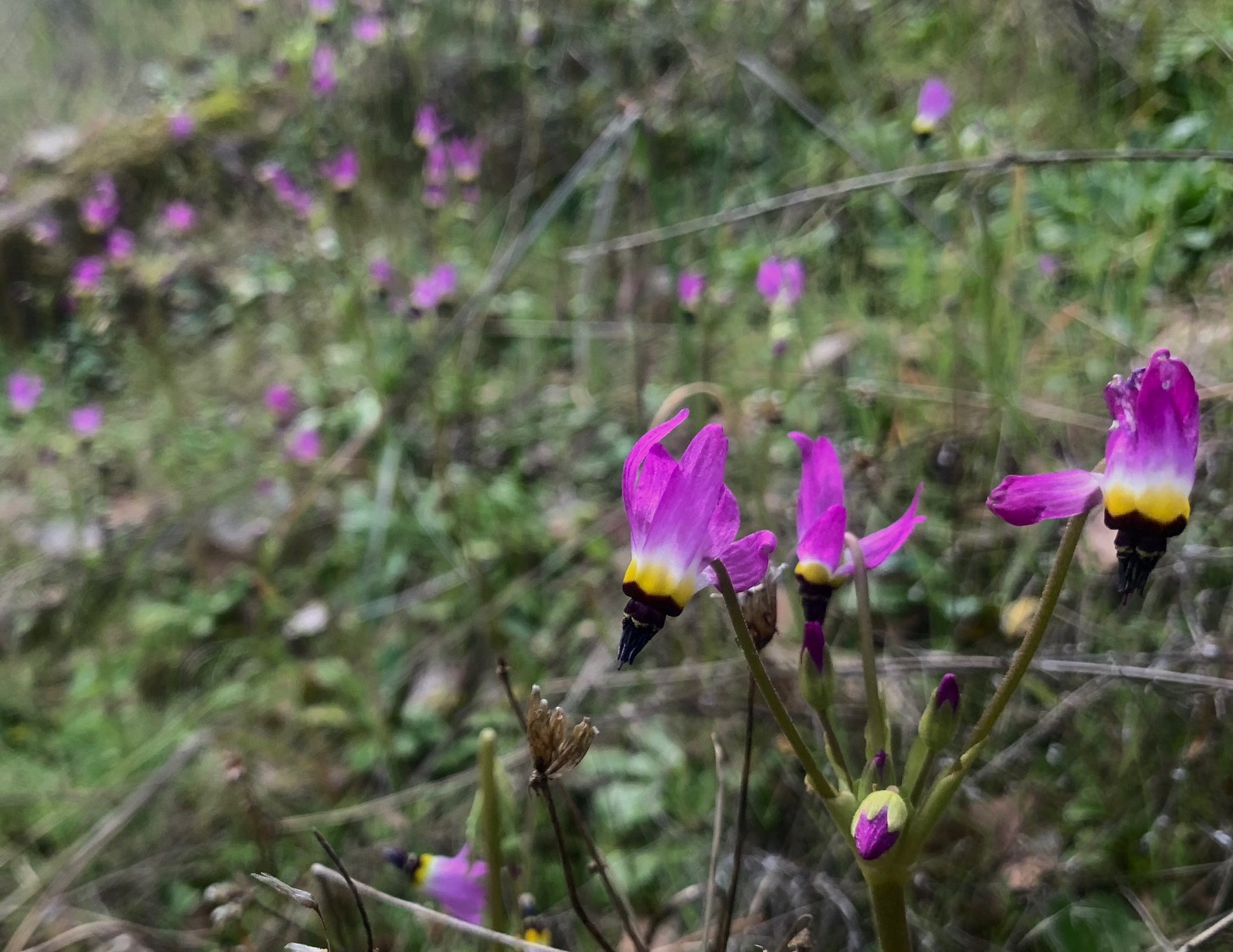 So I walked and walked, feeling mildly annoyed at catching my pack on the barbed wire. I reached the tributary and yes(!) there is a small gap in the fencing. I looked at the smaller tributary and again at the larger creek and decided that if I was going to get wet anyway I should just get back on the route I wanted to be on. I carefully hopped the fence and walked to the split in the water. The creek was wide, fast and shallow from the looks of it. I stuck my pole in to gauge the depth. “Oh no! The middle is probably going to be hip deep and there are several sections to cross”. I declared the creek to dangerous to cross alone. I wasn’t prepared to do this solo. I made the difficult decision to backtrack, pouting all the way. Back to the fence line, over the barbed wire and across the smaller tributary. “How bad could it be?”, I told myself, trying to curb my increasingly bad attitude. And so I walked and walked and walked some more. Stepping over fallen trees and rock outcroppings, the deer path no longer present. Another quick look at the map showed that I was still following the park boundary line. Again, not lost, just off route. 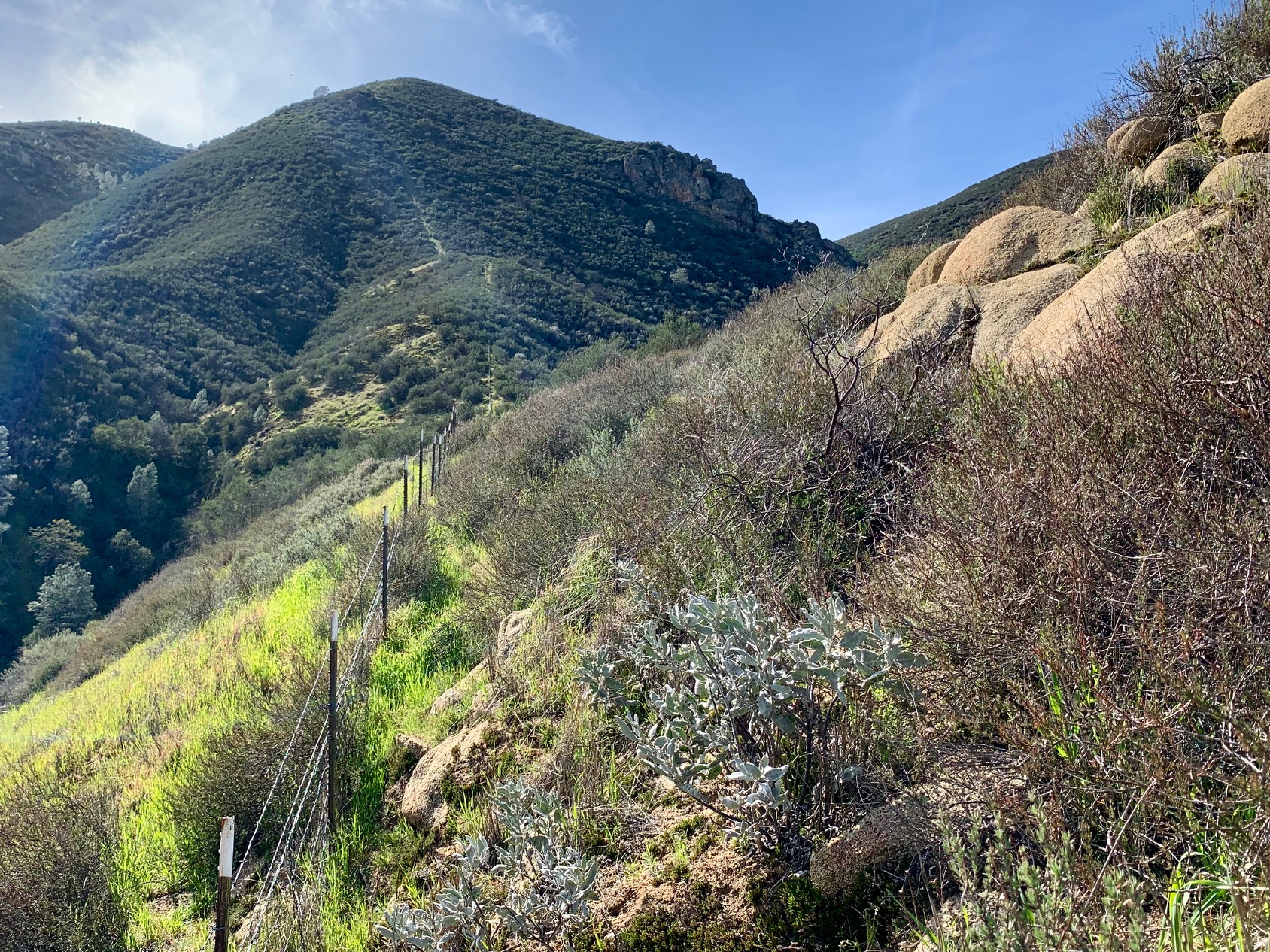 My feelings of dismay were starting to vocalize in my head again… And just ahead I noticed that the chaparral brush is getting more dense. Too dense to walk through. The best decision was to see if I could walk around this section or crawl through. I reluctantly squatted down and crawled for a few hundred feet towards the northwest, being sure to stand up a couple of times to get my bearings. I wound my way through, being careful to watch for snakes and scorpions and found my way back to the fence line.

I’m at a corner. The fence turns hard to the right and ahead is the climb up to the ridge line towards South Chalone Peak. 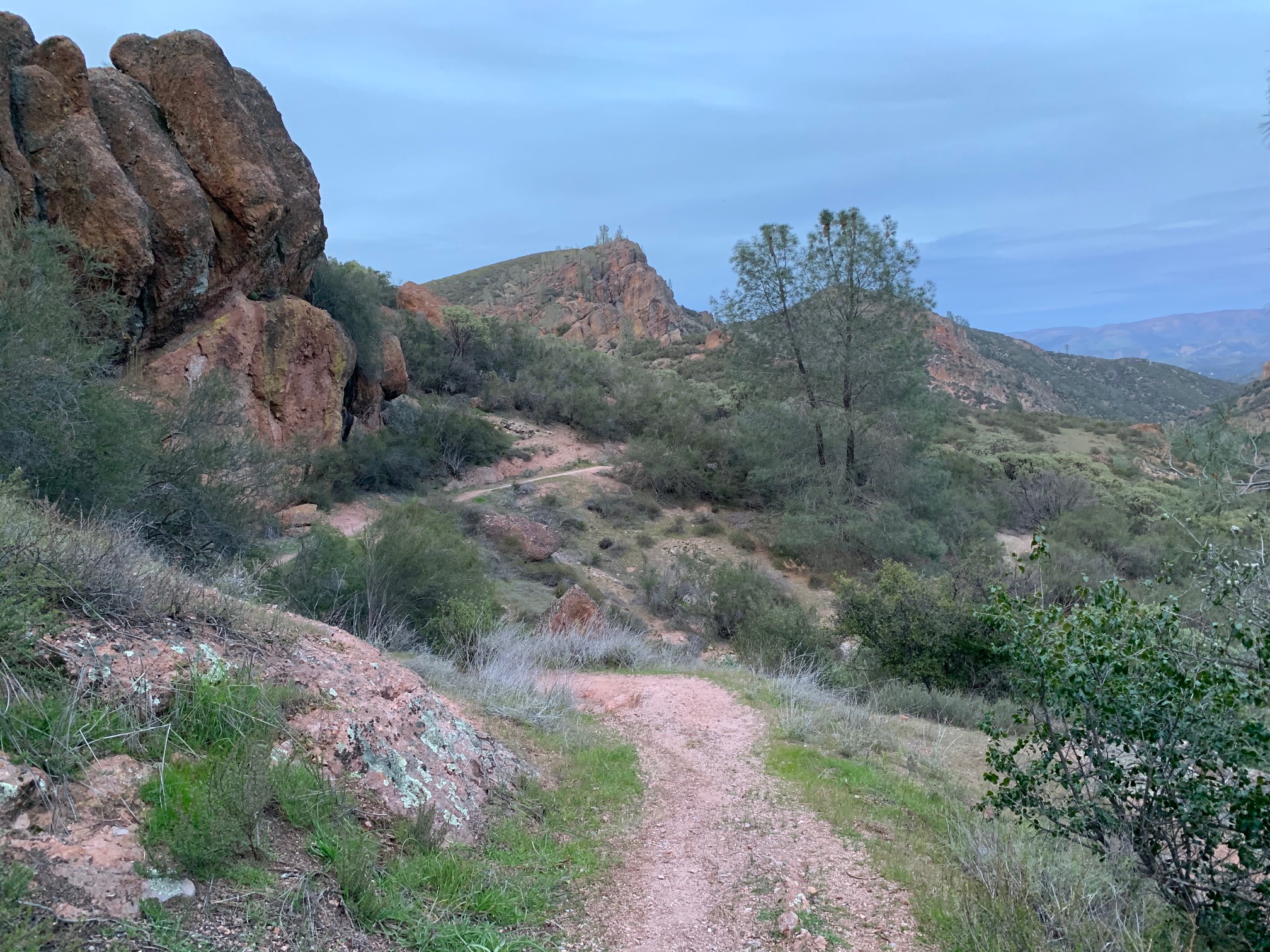 “The next few miles are going to be rough”, I said to myself. “Should I just turn around? I’m not really enjoying this…”. No, I was committed to this journey and already 7 miles in.. I kept walking. And walking. Up, up, up. Uphill a lot, then downhill a little, slowly working my way up to the ridge line. The wind was picking up and though the sunset was still a couple hours away, the light was starting to disappear behind the mountains. I knew I needed to speed up otherwise I’d be hiking next to the fence in the dark. Bad idea considering the terrain.

I trudged along as quickly as I could, finally reaching South Chalone Peak and continuing a around the backside of the summit. In the distance I saw redemption. North Chalone Peak trail (hooray!) and started booking it out of there. A couple more miles of twists and turns later and I was at Bear Gulch reservoir. Back in familiar territory right as the sun was setting. It was truly beautiful and felt really good to be there. I took a moment to reflect the days’ adventure.

Was the trail more unpredictable than I expected?: yes

Was the water deeper than I had planned for?: yes

Were the uphill sections more challenging than I expected?: absolutely

Did the wind pick up like I had hoped it wouldn’t?: yes

Was that really a mountain lion track I saw on the steepest section I hiked?: yes, that happened…forgot to mention it…

Was it getting darker as I sat there?: yes, time to get moving 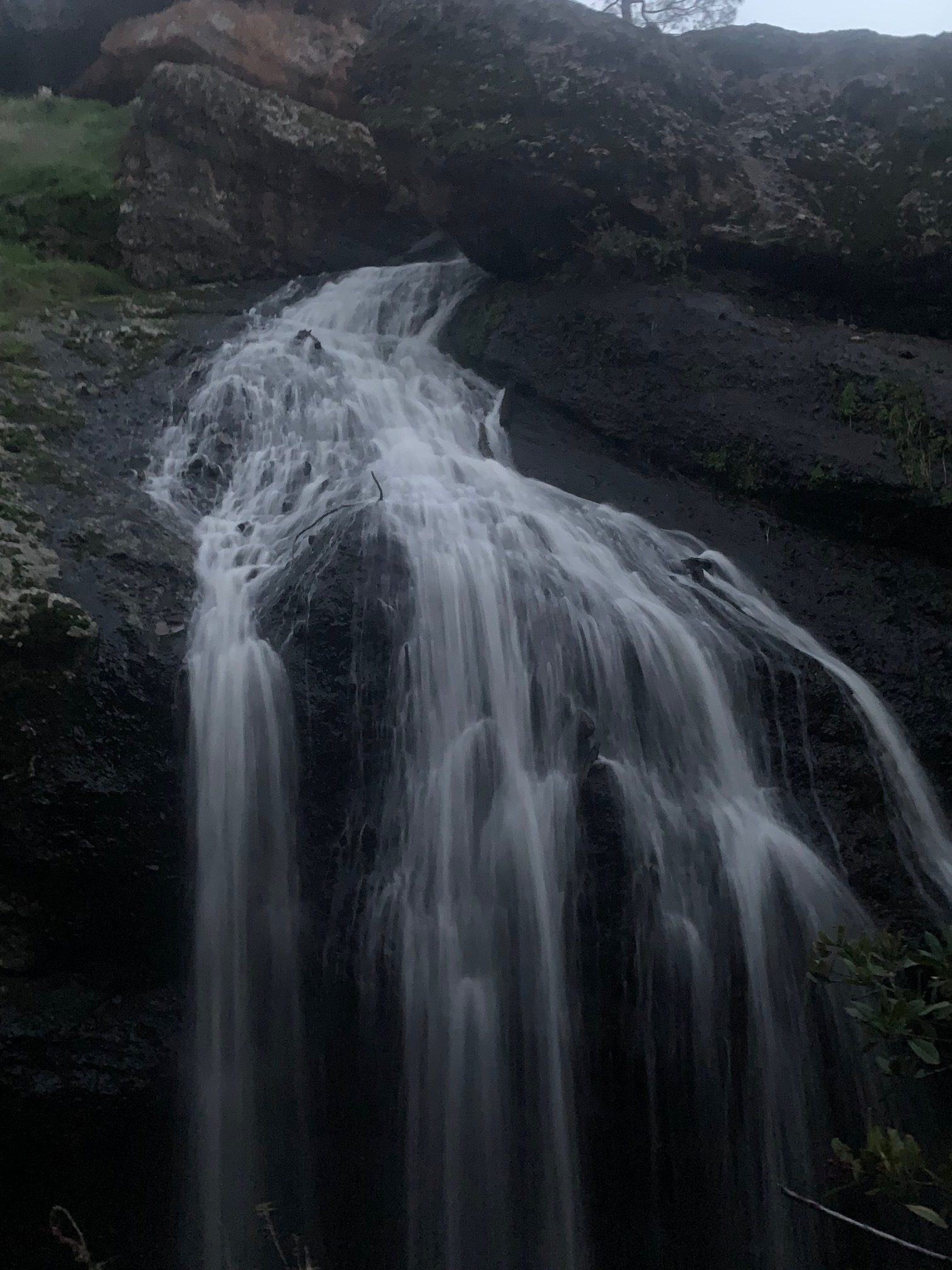 I thought it would be best to cut through Bear Gulch Cave to shave off a little mileage. Moses Spring was running strong and spilling into the rock-fall cave in the most amazing way. I’d never seen it so full of water. I wanted to stay put but I still had more hiking ahead of me.

Walk, walk, walk some more. It’s dark now and I’m exhausted. Somehow, though I had hiked this trail many times, I kept missing my turnoff away from the rock climbing area. Luckily I had passed a couple of  women who had just finished climbing and followed them out. They were even kind enough to give me a ride back to my car, saving me the last 2 miles of my hike. (Thanks Emily and friend!!) 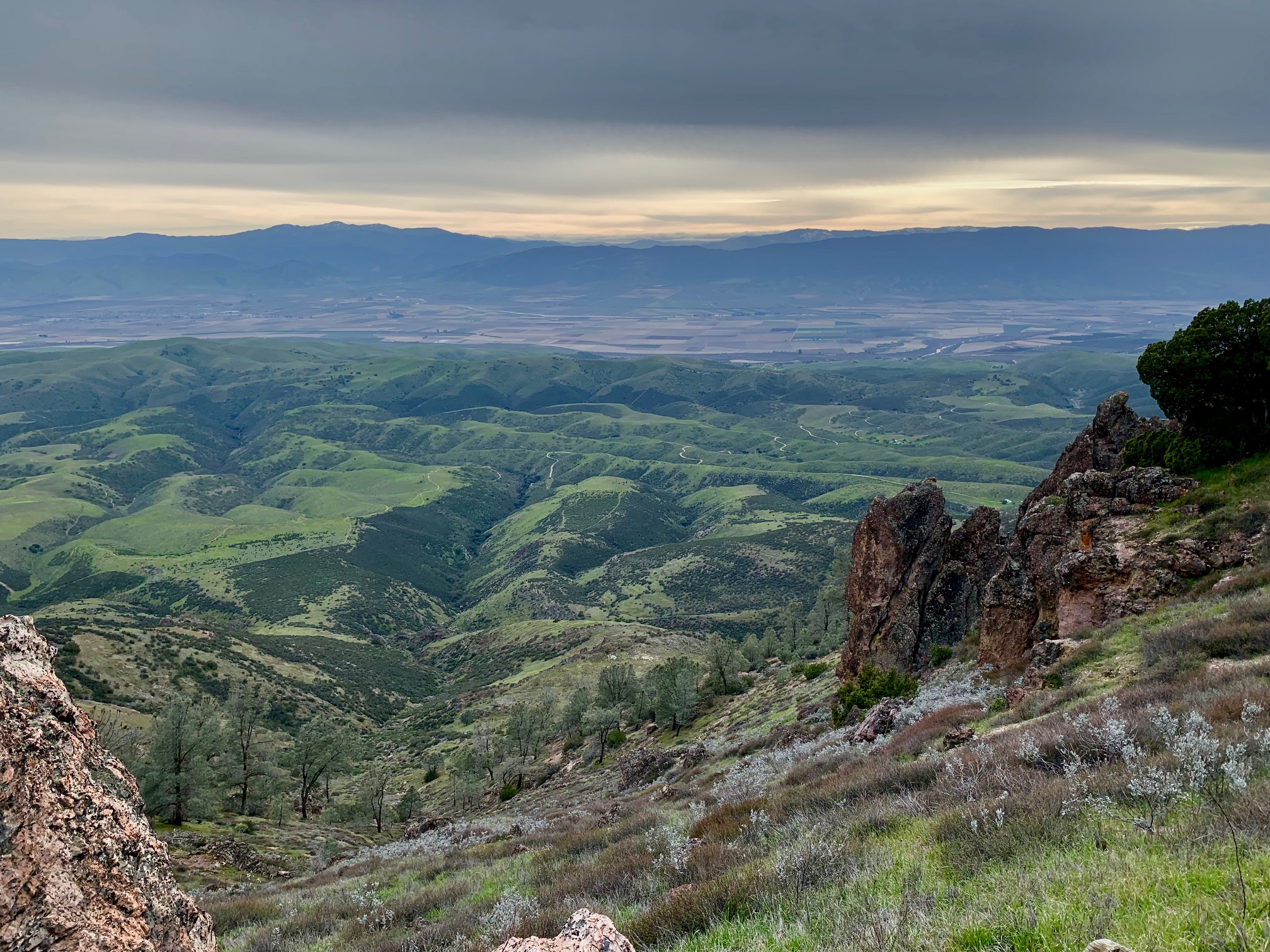 What a crazy day! I was never lost. I was able to utilize my navigation skills and make logical decisions to keep myself safe. Several times I really wanted to turn around but I didn’t (though you shouldn’t feel like you need a reason to turn around if you want to). It wasn’t the most beautiful hike, though I saw some amazing things. It wasn’t overly enjoyable, but it was an epic adventure in many ways.

Now to plan my next adventure. There’s no better time to get back out there.

Until then, Happy Trails!

*note: this is a moderate elevation area that can be very windy and brutal. Weather is unpredictable. Though I encountered a lot of water, there is generally very little for most of the year. Essential 10 is the bare minimum you should carry. Layers and extra food and water are highly recommended.

I ended up with around 13 miles hiked.

**disclaimer: off trail hiking is acceptable in this park and the surrounding wilderness though it is frowned upon. Know the rules of the area you are visiting. Those rules are in place for a reason. Off trail hiking can be very dangerous and is not to be taken lightly. 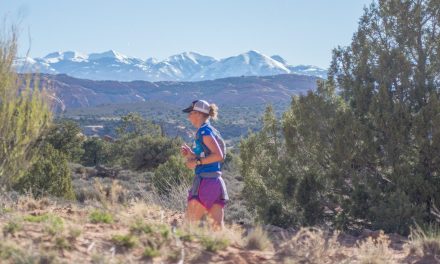 How to Spot an Ultra Runner 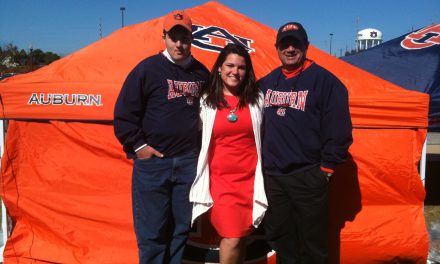 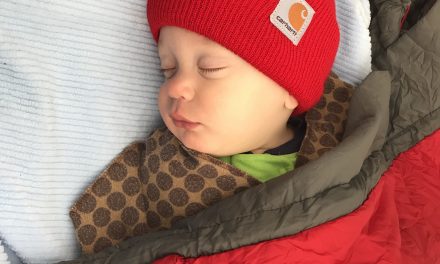 Going the Distance – With an Infant?