From the Editor: Our fabulous Facebook group All Women All Trails has almost 50,000 members – what an amazing source of experience and knowledge! For this post, I asked the group: “What’s the best trail magic you ever received or experienced?” Here are just a few of the responses I got.

Have more to add to the conversation? Leave a comment below!

“I gave Trail magic in Virginia, drove a pair of thru-hikers down to Devil’s Backbone Brewery where we ended up inviting them to have lunch with us. When they went to the bathroom we told the waitress we’d cover their meals as a surprise and when me and my friend went to the bathroom they told her they’d cover our drinks! It was so funny how it worked out.” -Jillian C.

“Literally someone taking my trash. That made me so happy.” -Kelly T.

“A local Hawaiian family picnicing on a spot near the trail head thought I needed some meat on my bones and asked me to join them. It was a feast. Molokai, the friendly Island.” -Janet G.

“More of an accident that purposeful trail magic but someone lost a woman’s long sleeve REI button up when I was in backpacking inGlacier National Park. I was being eaten alive by mosquitos on that trip because my long sleeve layers were too heavy to wear (literally counted 87 bites at one point). I rinsed that shirt and wore it the rest of my trip. If saved me from being miserable. I still have and wear the shirt.” -Katrina P.

“While hiking the Coast to Coast Trail in England with a friend of mine, we met a German couple also hiking. We spent three weeks walking and we would pass by each other at different times. Who ever was ahead would pay for a couple of pints of Guinness at a pub we thought the other couple may stop at along their trek. After a long day on the trail there was nothing like a beer with your name on it handed to you. Cheers!” -Katey K.

“In Phoenix I trotted down the trail with my car fob clipped to my dog’s collar. Got back to the car…no fob.

I desperately retraced my steps as the sun was going down but no luck. Fob gone. Wondering how I’ll spend the night/get into my car (and phone) etc., I head back to the parking area…to find my car fob in a dog baggie tucked under my windshield wiper. Wallet still in glove box, phone still in console; someone returned my fob and took nothing.” -Jaye L.

“On my first thru-hike I brought my favorite pair of flip flops as camp shoes. We stopped for a break at a beautiful lake and there were a pair of Crocs. My husband convinced me I needed to take them. I refused- why did I need to carry ANOTHER pair of shoes (that I probably would never wear?) He shrugged, strapped them to his bag and we continued on. That night at camp, wouldn’t you know it? My dang flip flops broke! Guess what I wore the rest of the trip? Those Crocs. Perfect fit. I bring them everywhere now!” -Kimberly C.

“On my first thru-hike I brought my favorite pair of flip flops as camp shoes. We stopped for a break at a beautiful lake and there were a pair of Crocs. My husband convinced me I needed to take them. I refused- why did I need to carry ANOTHER pair of shoes (that I probably would never wear?) He shrugged, strapped them to his bag and we continued on. That night at camp, wouldn’t you know it? My dang flip flops broke! Guess what I wore the rest of the trip? Those Crocs. Perfect fit. I bring them everywhere now!” -Kimberly C.

“We were hiking up Chilkoot Pass, pretty much boulder scrambling. I took a bad step and my leg gave out. My aunt started to ferry my pack and hers up while my mother hung back to help me through some rough spots. A young man came through, made sure I was ok, and hauled one of the packs up several hundred feet for us. Made it easier for us to get up to better ground, and fortunately I was able to carry on at that point. He ended up hiking the pass a few times and helped some others out, too. Awesome guy— made sure everyone was going to make it up.” -Sarah M.

“On the Camino Ingles in Spain- passed a bread delivery van going mail box to mail box dropping people’s hot bread off. He saw we were pilgrims and started to speak to us in Spanish, but we couldn’t understand him. He hand signaled to come closer. Went inside his van and handed us a hot baguette and wished us a “Buen Camino!”. It was a magic moment.” -Barbara P.

“I was going through a really tough bout of depression last year because it was my first holiday without my family. I celebrated Thanksgiving and Christmas without seeing anyone and even my friends were out of town visiting their families. On Christmas day I decided I had to get out of the house, for my mental health, and ended up hiking up Green Mountain. It was my first trail in the snow alone and I only ran into a total of 3 people on a regularly busy trail. Near the top I ended up running into a family of deer. It was incredibly peaceful and snow had even started falling very lightly. After coming down from that hike I felt a whole new sense of peace in my heart and I had to remember not to take the small things for granted. I’ll always remember that scene like a movie.” -Emily E.

“My first ever solo backpacking trip was Springer Mountain to Unicoi on the AT. My pack was heavy, GA mountains were way harder than I imagined, and I had no idea what I was doing, leading to me running out of water doing the Sassafras/Justice day. I finally sat by a road crossing weeping, thirsty, and feeling like an utter failure. A passerby spotted me and pulled over to help. I was so embarrassed but relieved. She refilled my water bottles and gave me her number in case I needed to get off trail. I still have that slip of paper with her number stuck in my travel wallet as a reminder of that awesome kindness.” -Suzie R.

“Magic – I was on a solo hike in the Tetons, using my dad’s Garmin GPS unit back in 2011. When I returned to the camp, I realized the unit had somehow popped out of my backpack. I was sick to my stomach, having to report that I lost his expensive GPS. He took it well but it really dampened the trip for me. Two days later, when we returned to his home, there was the GPS on the porch!! A note accompanied it that said something like, “We found this in the Tetons and used the Home button to locate the owner’s address. It happened to be just a bit off route for us so we thought we’d return it.” WHO DOES THAT??! Outdoorsy people, that’s who! We live 325+ miles from the Tetons. They didn’t leave any contact info but they did leave a lasting impression of how good people can be!” -Melissa K.

“Hiking on the AT and was struggling to find a ride back to the trail from a resupply when the Jack Daniels distributor offered myself and a few other hikers a ride!! And some shooters 😁😁 That was a lucky day!” -Mallory M.

“On my way up Mt St Helens, another climber offered me gummy worms and I nearly cried because it was exactly what I needed. A little sugar, and a lot of kindness when I was looking up the last mile and 2,500 ft.” -Emma K.

“Walking with a friend Het Pieterpad in the Netherlands. We both wanted coffee, but there was no restaurant or something like that en route for the next 2 hours. To be sure we asked someone in a small village and she invited us in her home and gave us coffee and cake. Very nice.” -Marion B.

“I was served Thanksgiving Dinner at Mountain Crossings on the Appalachian Trail in GA. The man who ran the hostel brought all of the leftovers from his family’s Thanksgiving lunch plus plenty of extras. It was magical. A beautiful sunny day and tons of food, we stuffed our faces under the tree with all the shoes.

I live about two hours from the AT now and I take fresh turkey, ham, and cheese sandwiches to the trail every chance I get. Through hikers love it.” -Kat A.

“I was less than .1 mile to the shelter and had just crossed the last road of the day. I tripped on a piece of rebar sticking out of the ground and face planted in the trail, grinding gravel into my knee and hitting my head on a rock (which would result in two black eyes by the end of the week). We bummed a ride from a reluctant day hiker to the Dollar General. I realized I needed to get to the Urgent Care to get my knee cleaned. A random woman offered to give us a ride, not knowing it was 30 miles away. She took us to the Urgent Care, waited while I got fixed up so she could give us a ride back. But instead of taking us back to the trail, she let my hiking partner and me sleep in her spare room, shower, do laundry and then took us back to the trail in the morning, with hard boiled eggs and cupcakes. No hiker feed ever came close to this magic.” -Deane G.

“Hiking in the Jewel Basin in MT. I started getting nervous on the trail. It was so narrow and steep in spots. I was debating turning around.

We came across a mountain goat laying in the snow. She got up and came onto the trail. She lead us all the way to the top of the mountain. If we fell behind, she stopped and watched us until we caught up with her. I swear she was encouraging me. This is my favorite hike of all time because of the mountain goat.” Becky K.

“At a shelter in NJ, the water source was .5 away, down a steep hill and someone had put several 5 gallon jugs of clean water in the bear box. After the longest hike to that date on top of a knee injury it was so welcome to know I did not have to walk 1 more mile to get water.” -Penny V.

“Going into Tesnatee gap there was trail magic. The ladies from a church crocheted toboggans and left them for the hikers. Best trail magic ever. Best hat ever! …and they had Dr. Pepper. 😁” -Jojo D. 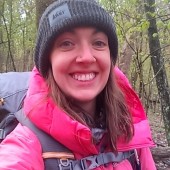 Nichole is the website and content manager for All Women All Trails. She fell in love with backpacking on her first-ever trip, in Zion National Park, and soon set her sights on the Appalachian Trail, which she thru-hiked in 2016 under the trail name Karma. Stints on the John Muir Trail and Long Trail followed the next year, and recently she's been dabbling in trail ultra-running, completing her first 50k in 2018. She currently works in biotech and lives in the Bay Area, California with her husband and greyhound. You can find her on Instagram @nicholeyoung1. 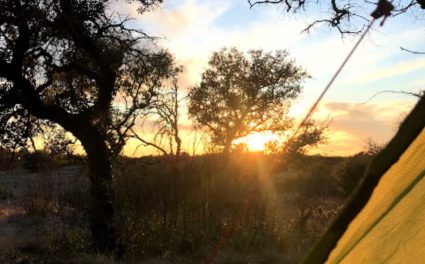 Get Yourself Ready For a Long Hike 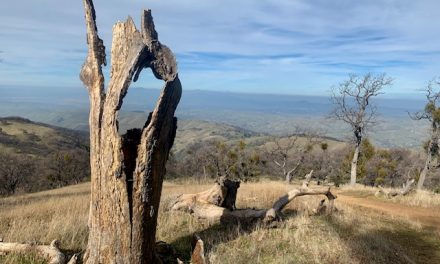 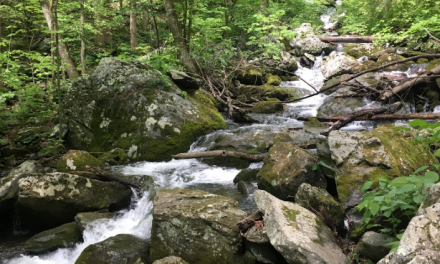 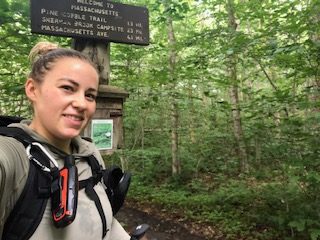