Winter Backpacking: Is It For Me? 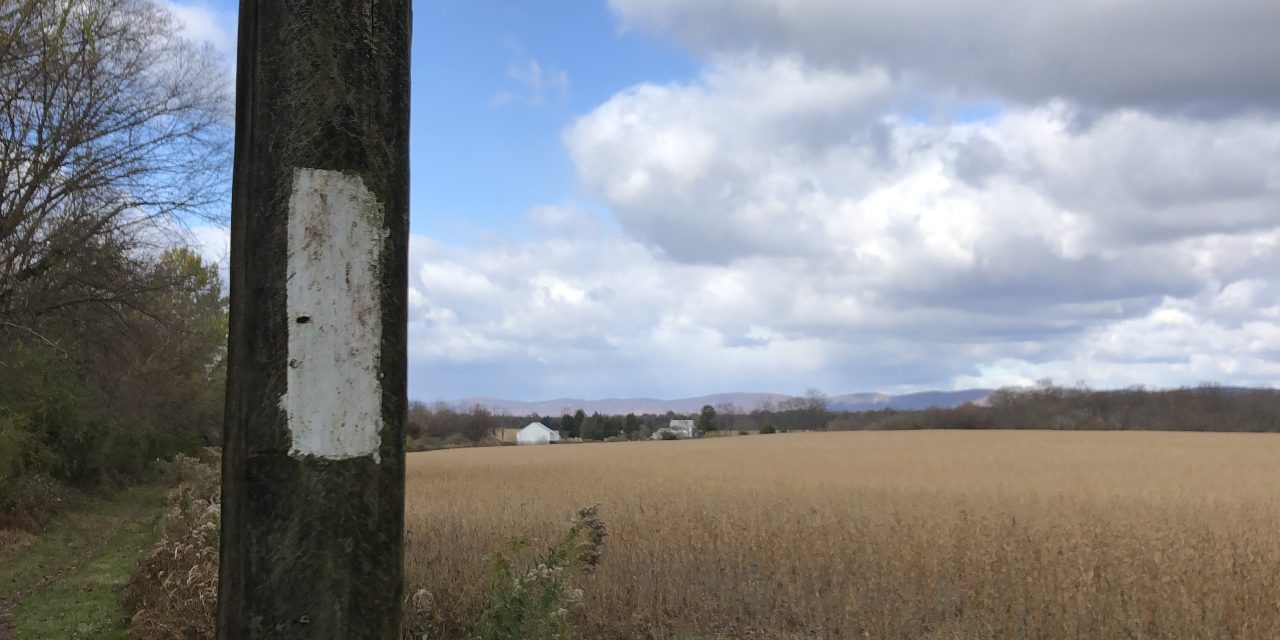 Click on Katie’s name above to see all of her posts about past adventures!

A long weekend in November leaves the desire for one to take a long walk on the Appalachian Trail. With only four days, I set an ambitious goal of 62.5 miles in Pennsylvania, Pine Grove Furnace to Clark’s Valley Road NoBo. For those just joining in on the adventure, I set out June 22nd, 2019 with a goal of completing Maine and New Hampshire in 6 weeks this past summer. I surpassed that goal and made it down to Manchester, Vermont. Only to return back on trail about 2 weeks later and make it down to Great Barrington, Mass. Afterwards, I headed back up to New Hampshire for some 4800 footers and thus returned home to prepare for the new school year. I spent the next several weekends piecing together Great Barrington to Kent, CT in a series of weekend backpacking trips to connect my footsteps. I have since completed that stretch, which leads me to start tackling the next closest state of Pennsylvania.

November 7. I set out for the trailhead around 5am to meet my shuttle driver at Clark’s Valley Road at 8am. I was driven an hour away and dropped off at Pine Grove Furnace. The anticipated rain for the day had already started rolling in. As my shuttle driver saw me off, there was another hiker organizing his pack by the museum. We briefly exchanged pleasantries and realized he was headed to the same shelter I was for the night. Woo, company! Last year I was out this time of year and had to camp for the first time solo, so I was more than happy to have a campmate.  I followed behind John’s footsteps as he quickly became out of sight as we both headed towards the shelter. Luckily, the rain wasn’t a steady downpour but constant light rain. I hiked in rain pants, a rain jacket, my bright orange hat, and the last-minute addition of an umbrella. Thankfully, the high for the day was 49, which made the walking more comfortable. The rocks came in occasionally annoying but were totally manageable. I felt some hot spots on my feet and easily walked the 7.2 miles before noon and felt I deserved a break from the rain and detoured to the James Fry Shelter. I was surprised to see a tent set up in the shelter but never actually met the person inside the tent. I quietly ate my lunch and doctored my feet. I didn’t stay long because I was anxious to get to camp before it got dark. It wasn’t a bad walk until I got to the rock maze… It was eerie with fog, slippery from the rain, and still difficult to navigate despite the spray-painted arrows. I only got sidetracked once and I blame it on slipping and falling.  My feet and legs were ready for a break around the 13-mile mark but I kept pushing on.  I made it to camp around 3:30-4 just about 30 minutes behind John. We both set up in the shelter claiming opposite sides on the bunks. We both shared our hiking experiences, gear, food, etc. I was happy to have the company as I climbed into my sleeping bag around 7PM. It was still raining, so we didn’t have a fire. The low for the night was around 30 degrees. 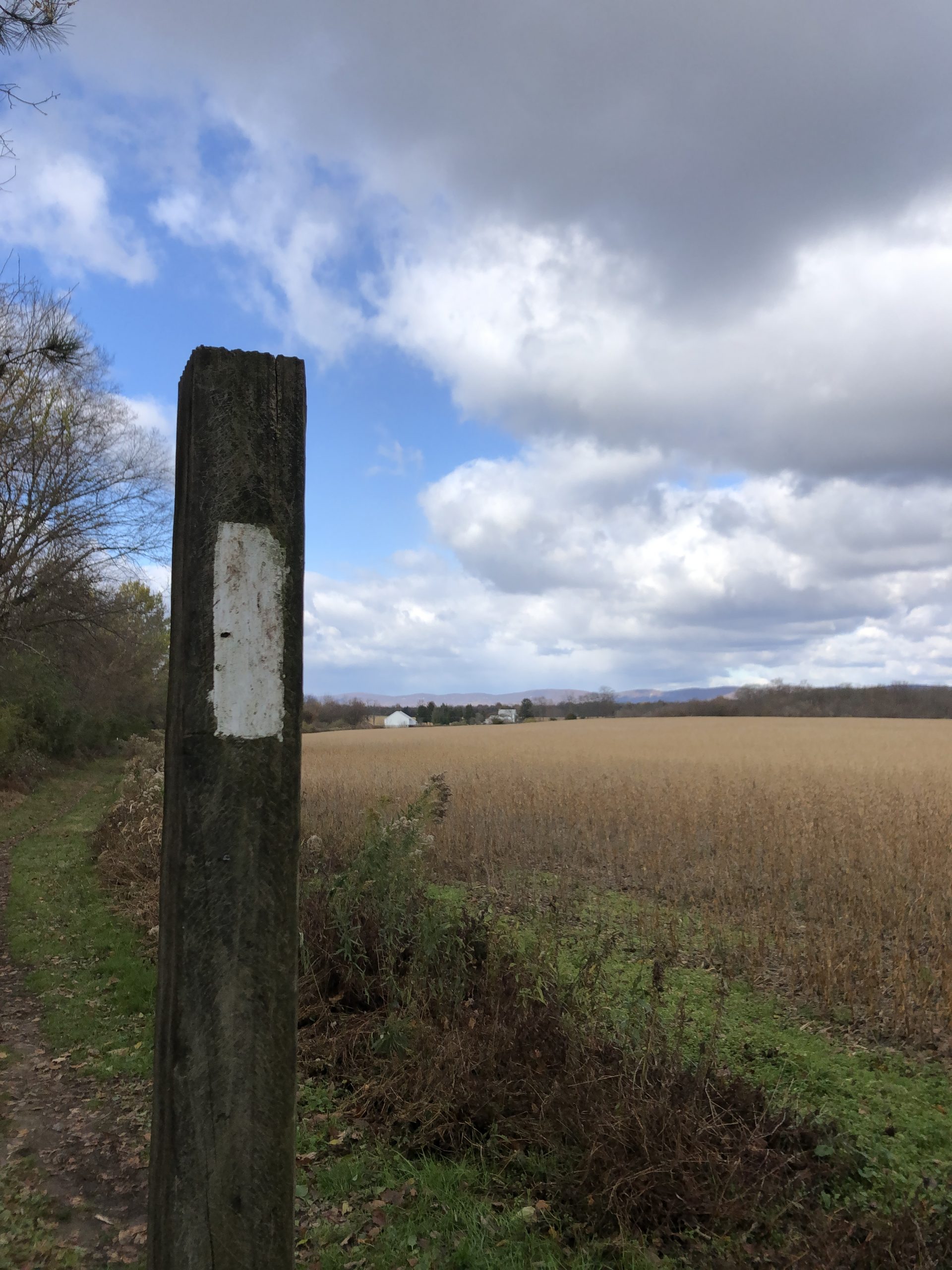 November 8. The next morning I woke up around 6:00 as it was just beginning to get light outside. I didn’t actually get up and moving until around 6:30-6:45. I did not look forward to putting on wet shoes. I had to make the choice to put dry socks in wet shoes or put on my wet socks into my wet shoes. I heard if you put hot hands in your shoes it’s a good winter trick to drying them out, which I attempted but my hot hands were expired and never got hot. Ultimately, I decided to put on my wet socks and shove my feet into the wet shoes. Ouch! It was horrible and my feet started to hurt. I packed up quickly and headed for the trail. I knew from previous experience once I got walking my feet would warm up and luckily I got to climb a bit in the morning, which made warming up much easier.  I climbed up Center Point Knob, which is mostly viewless. I heard something make a noise in the leaves only to look up and spot my first fox running away! I just hope I hadn’t scared its breakfast away as it bounded out of view.  I headed down the mountain to enter the town of Boiling Springs and get a coffee. I stopped at a parking lot to eat my breakfast. I filled up my water at the Appalachian Trail Conservancy regional office, where John caught up to me.  I stopped at Caffe 101, which felt so warm inside and grabbed a PSL to go.  Next, I walked through the rolling farmlands. It wasn’t bad except the exposed terrain made me an easy target for the wind. The high was only around 40 for the day and I would see occasional snow flurries falling from the sky. I passed another backpacker, who was heading South, about 10 miles into the day.  Shortly afterwards, I came to a bridge, where another hiker was sitting on the opposite end and couldn’t hear/see me as I walked up. Turns out this hiker (old trail name Jeff, not sure of the new one) had summitted Katahdin the same day as me! I had never met her though. She had encountered some of the same trail buddies as me. She had gotten off of the trail for about a month and was only going a little bit further and planned to continue her hike in March. She also had stayed the night at the shelter I was headed too and shared a hiker carrying 80lbs had left some whisky and peanuts there. That would help keep me warm with the low suppose to be around 20. As we were chatting, two other Sobo thru-hikers, who had climbed Katahdin June 25th came walking up. They shared that they had to call the cops on some thirteen-year-old boys that were out in the woods in the middle of the week pointing rifles at each other. They reassured me the police were all over it and I was not near the area it occurred in. I said my goodbyes and continued my way North. 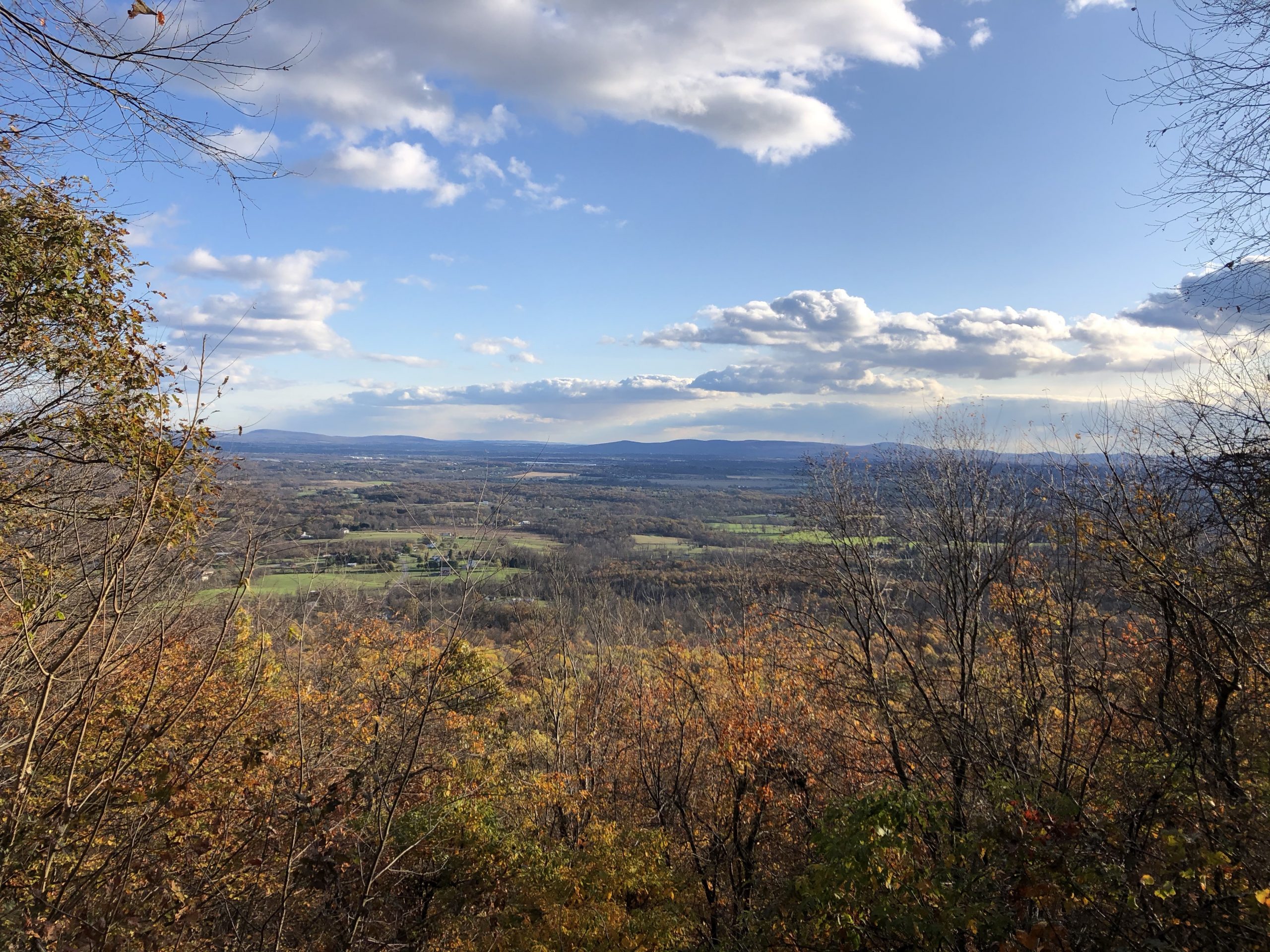 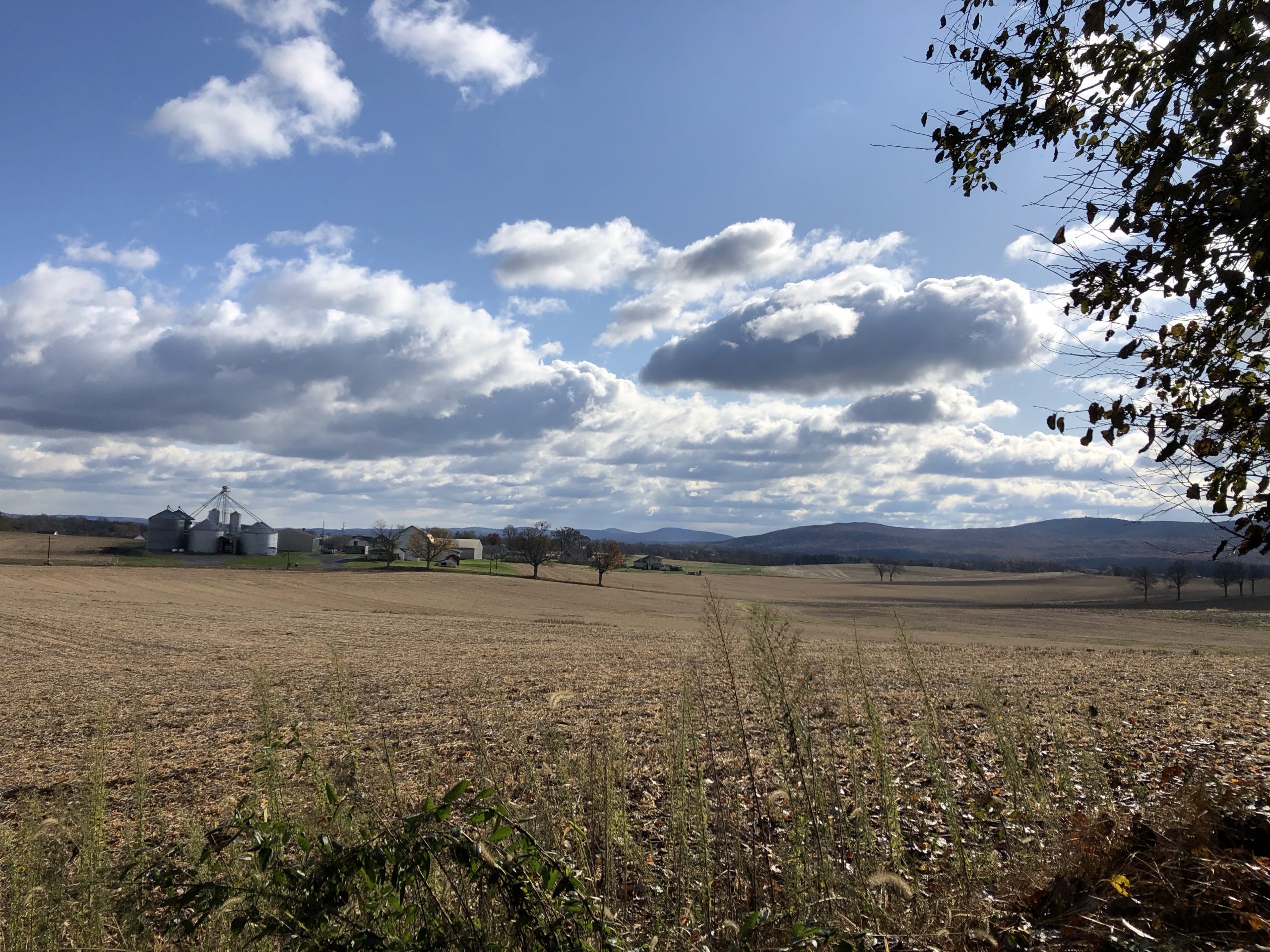 I encountered two other Sobos unknowingly until afterwards that were surprised I planned on camping out for the night given the drop in temperature but I didn’t see what another choice I had. I chatted with three other day hikers as I was getting close to camp. On my ascent, I passed by one final chatty day hiker about gear, my journey, etc. About a mile later, I got my first view of the trip, which allowed me to see the farmland I had travelled across all day and the ridge I had started the day on in the distance. I was tired but happy to reach the shelter. No one else was there but I decided to try out my tent.  After setting up my tent, I tried several times to start a fire but it was too windy. Running out of daylight, I cooked my dinner and again tried to start a fire using my stove like a blowtorch did the trick. I forgot to mention that I also had an audience while doing this. A raccoon was watching me from a nearby tree. I heard something walking up but thought it was a person. The raccoon watched closely from the tree as I shouted, tossed some rocks in its direction, only to continue to watch me from the tree. Eventually, he scurried down the tree and away.  No one else showed up to camp that night. I hung around the fire until around 6:30, put my food in the bear box, and headed for bed. I listened very closely throughout the night. I heard a mouse scurried across my pack twice, an owl, and some other bird. I had heated up my Nalgene with boiling water as an extra precaution. In addition, I had Smartwool leggings, my hiking pants, rain pants, two pairs of socks, Smartwool quarter zip, a Mountain Hardwear hoodie, a down jacket, gloves, balaclava, hood from the hoodie, and a knit hat. I also had a sleeping pad, Thermarest, a 10-degree quilt, and the warmest liner they sell. Can you tell I sleep cold? I was okay for most of the night with an occasional chill. The Nalgene only stayed warm until around 11 and it got cold in the early hours. 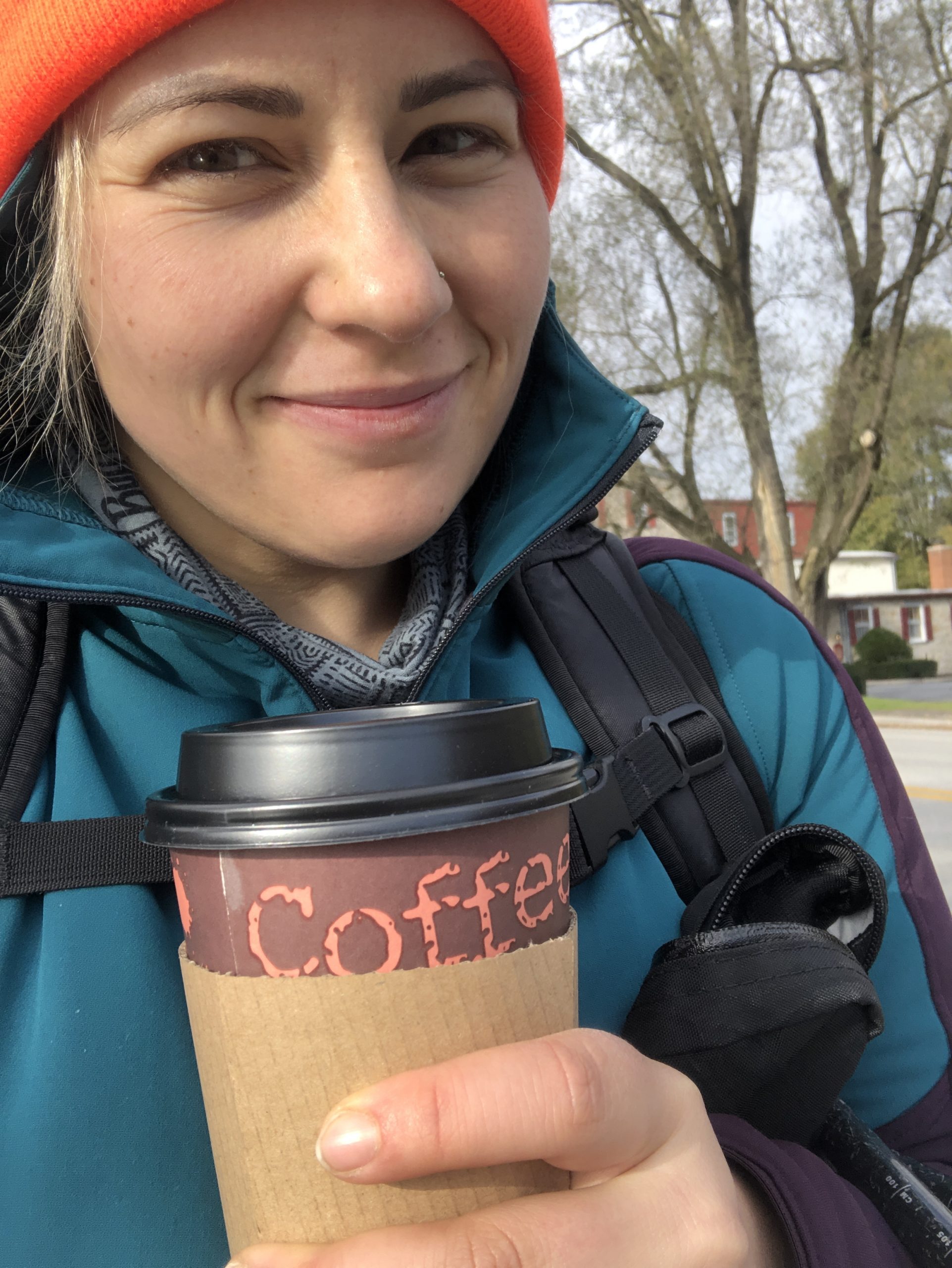 November 9. Truth be told with the lack of sleep and cold weather, I did not wake up on the right side of the sleeping pad. I knew from the start that I was questioning the crazy within me if I wanted to stay another night in the cold and potentially have to camp alone again.  I packed up and headed out of camp around 8 to try and wait until it warmed up slightly… ha! It was like twenty degrees in the morning. I begrudgingly walked down the mountain and across frost-covered farm fields and reentered the woods to climb up to a ridge. I started to encounter some day hikers and even more so when I descended the ridge into the town of Duncannon. Unfortunately, the PA rocks decided to show me some love for several miles.  Once I stepped on the road that led me into Duncannon, I checked to see if it was even possible to bail early and there just so happened to be Lyft and Uber in the area. I decided to walk the three miles through town before requesting one. I never felt more grateful to be sitting in a car with the heat blasting. I kept the heat on the whole drive home, enjoyed a hot chocolate, a hot shower, and even my heated blanket once I got home. It left me questioning if “winter backpacking” was even for me. Even though I’m ready to consider myself a 3 season backpacker, I’m going to try this winter backpacking one more time next weekend and will report back if you’re still sticking around. 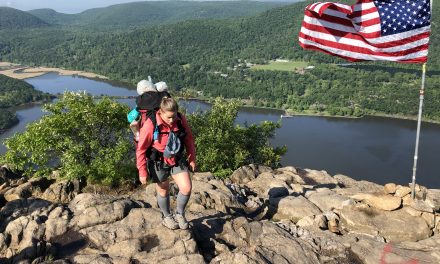 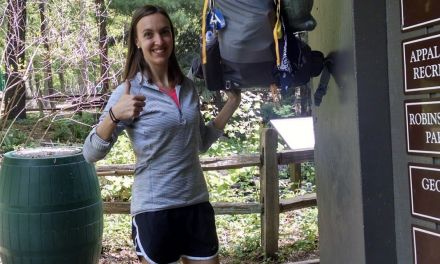 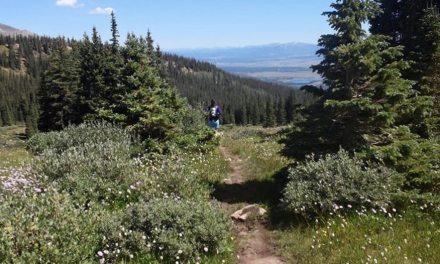 Planning and Prepping for a Colorado Trail Section Hike 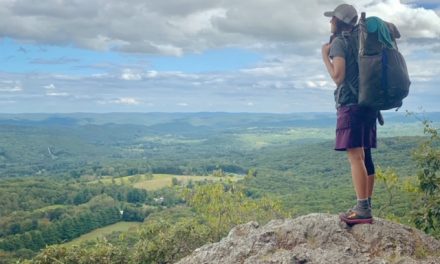 Days 7 & 8: A Zero Day and Reflections on Being Wild