You’re Not “Just” a Section Hiker 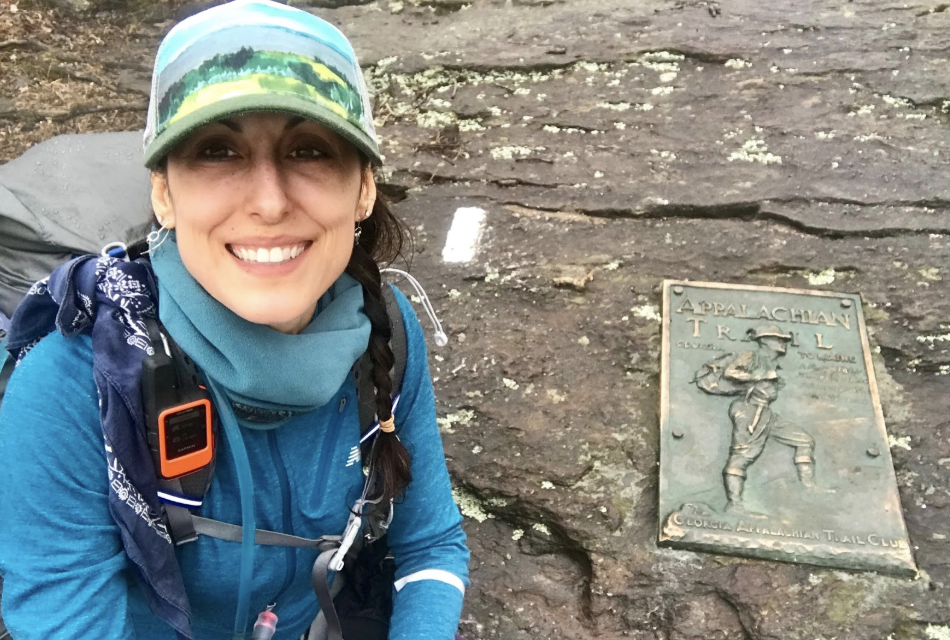 About the Author, Leah LaRocco: “Hi there, I’m a Long Islander who lives in Franklin, Tennessee. My first love was the ocean, but growing up camping and hiking around Vermont also contributed to a deep appreciation for the mountains. Public lands are some of my favorite places to hike and Great Smoky Mountains National Park is a regular weekend getaway. I work full time, but believe dreams and passions can and should be pursued outside of the everyday 9-5. As a naturalist, I hope to convey how incredibly healing the woods, water, and wildlife can be when we make the choice to step outside.” Find her via her Instagram, Facebook, Twitter, and Website.

I have a memory from when I was a little girl on a trip to Vermont with my family. I can’t remember the exact spot, but we were driving through a park and noticed a wooden sign with white letters on the left side of the road. It said “Appalachian Trail.” My dad commented that he didn’t realize the AT went right through there. Little did I know that a seed had been planted. Someday, later in my life, a dream to hike the entire 2,192 mile length of that trail would become an obsession of sorts. 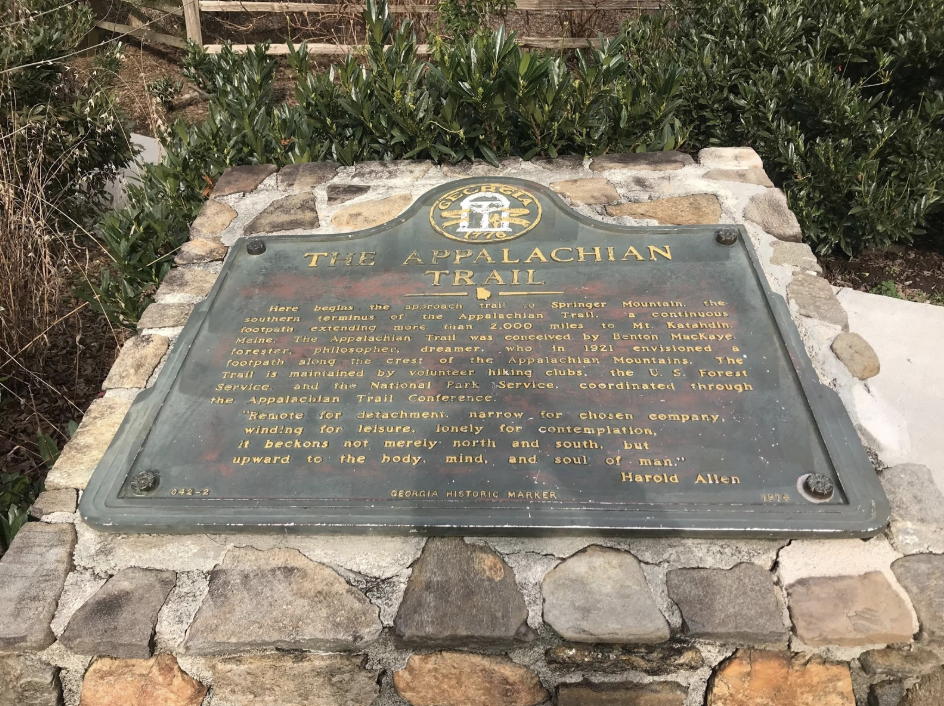 Life happens, you develop a career, a family, put down roots, and still the dream persists. Somehow in the middle of that, I’ve managed to hike 1,500 miles over the past few years on trips to national parks, day hikes, and my beloved local trails that prep me for every adventure.
While I’ve been able to do small bits and pieces of the AT over the years, I hadn’t done any multi-day trips. Over and over I’ve had people tell me to quit my job, just go for it, don’t wait around. While I love the passion behind these sentiments, I don’t want to throw away a career I’ve worked hard to build and a job I feel really blessed to have. So I decided that 2019 would be the year I officially start section hiking the AT. It’s time to combine all the bits and pieces and start highlighting the trail map with finished sections.
When I realized I had two days off over President’s Day weekend, an idea quickly hatched and I headed to Amicalola Falls to begin the journey. I felt physically sick to my stomach. I’ve done some small backpacking trips now, but would I be able to handle this? What if I got out there and realized I hated it? What if I didn’t fit in out there? What if my body fell apart on me? What if I was scared out of my mind? What if this whole dream was a sham? I choked down these fears as I drove, along with a protein bar I was forcing myself to eat because I knew I’d need the energy.
The weather was overcast with dense fog and so much mist that droplets fell from the trees like rain. I filled out the information at the Amicalola Falls Visitor Center and was told to park my car up a dirt road in a specified area that would be “really obvious.” I drove up the dirt road three times, not sure where to park, looking for the famous arch, until a truck drove by and someone who tests the water pointed to a spot. When I asked him where the arch was and where the Approach Trail started, he pointed through the woods and said to just walk until I came to a trail. Uh, ok. All alone, on some random road, with my pack on my back and my stomach doing somersaults, I headed into the woods with Guthook pointing the way until I came to a trail. Ok, here we go. What I didn’t realize until later is that I was on the East Ridge trail, the original Approach Trail to the AT. It goes to the same place as the new Approach Trail, but instead of walking straight until you hit the stairs, you start going directly uphill in the woods.
I passed a man day hiking who asked if I was going thru. “No, I’m just section hiking through the weekend.” Just section hiking? Hmm. Throughout the day, I had people stop me on the trail. “Are you a thru hiker?” “No, I’m just a section hiker.” They’d nod, tell me to have fun, and keep going. Somehow, unconsciously, I felt like I didn’t deserve to be out there as much as the people who were accomplishing a feat of endurance that would last for the next 4-6 months. Even though we’d all be walking the same terrain at some point in time.
There is so much emphasis placed on thru hiking long trails. Podcasts focus on it, countless books have been written about it, social media groups attempt to prepare folks for the arduous journeys they embark on…and yet, most of us in our lifetime will not be able to leave our jobs or take 6 solid months out of life to be able to do that kind of hike. While it is a dream for many, it is a reality for few. I wish there wasn’t an unconscious stigma that seems to imply that section hiking isn’t as important or as valid as thru hiking. Don’t get me wrong, I have so much respect for thru hikers, and I wish with all my heart I could do the same. What an incredible experience to have, and what athleticism and mental strength it takes! But at the end of the day, when years go by, section hikers and thru hikers all walk the same steps, hike the same miles, and treasure their experiences on these trails in much of the same ways. 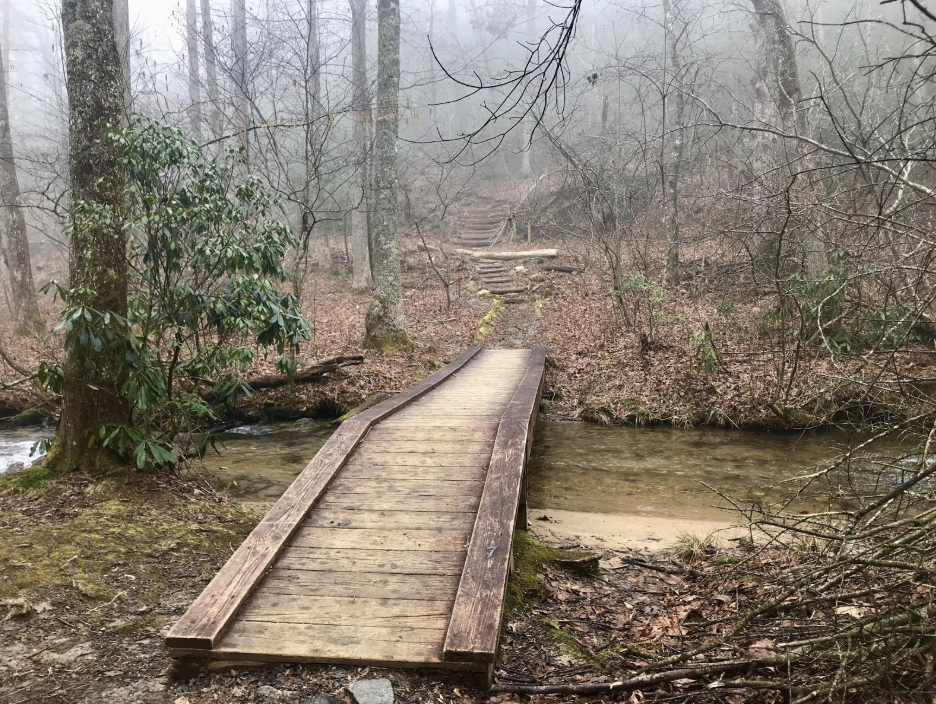 I get it now. I understand why people skip the Approach Trail. I put my headphones in and hiked uphill to the beat, counting down the miles until I would reach Springer Mountain. My anxiety from the drive melted as my feet found their natural rhythm among the roots, the rocks, and the mud. I was home. The trail is where I belong. Closer and closer to Springer until finally the mountain laurel cleared and the rocks that held the plaques signaling the start of the AT appeared. There were two hikers there who were just packing up to head to the Springer Mountain shelter. One was carrying a full sized guitar, the other was talking about how loud he planned to snore that night. I immediately decided to hike on to Stover Creek shelter for my first night’s stay. I was exhausted from the approach and wanted to sleep well. After they left, I sat next to the white blaze and the hiker plaque and cried tears of joy. I was actually here. I made it. This wasn’t just a dream. This was the reality I was sitting in. After years of seeing pictures of this rock, I was touching the first blaze, thinking of all the people who’d had their hands and feet in the same place over the decades, gathering strength from them. 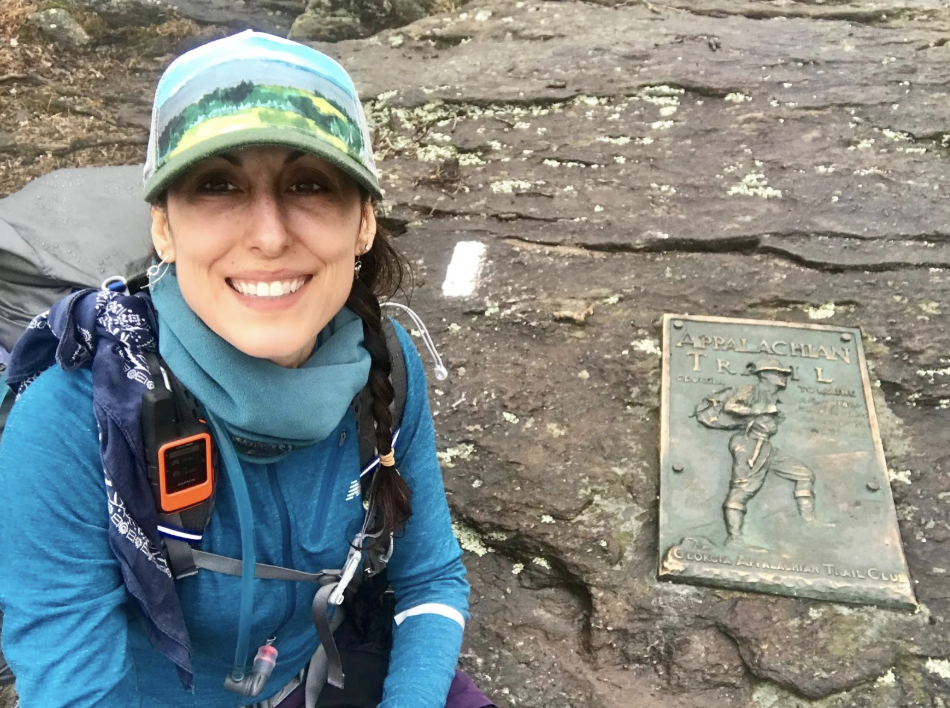 That night, I set up with another woman in the shelter, just the two of us since the guys had decided to sleep under their tarps. Everyone here was thru hiking and couldn’t have been nicer. All from different backgrounds, different states. Some of us planning to do the same miles the next day. The rain sang on the tin roof as I drifted off. 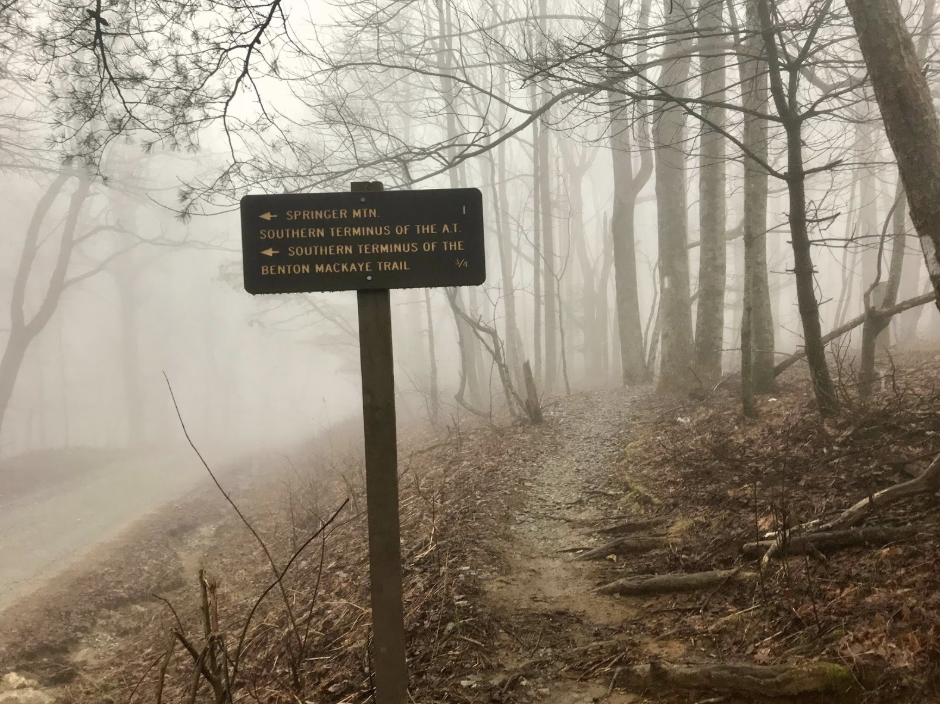 I was on the trail for 4 days, completing the 8.8 mile Approach Trail (I went back at the end and got pictures by the arch and did some stairs), 38.2 miles of the AT, and 1.2 miles getting to each shelter, for a total of 48.2 miles. It was such an awesome 4 days, and I can’t wait to head back for 9 more days later this year. I was the only section hiker out there, and everyone I met was wonderful. I’ve never had the experience of being in a group of strangers, all in the same situation, helping each other out by sharing food, gloves, hand warmers, gear, and stories. 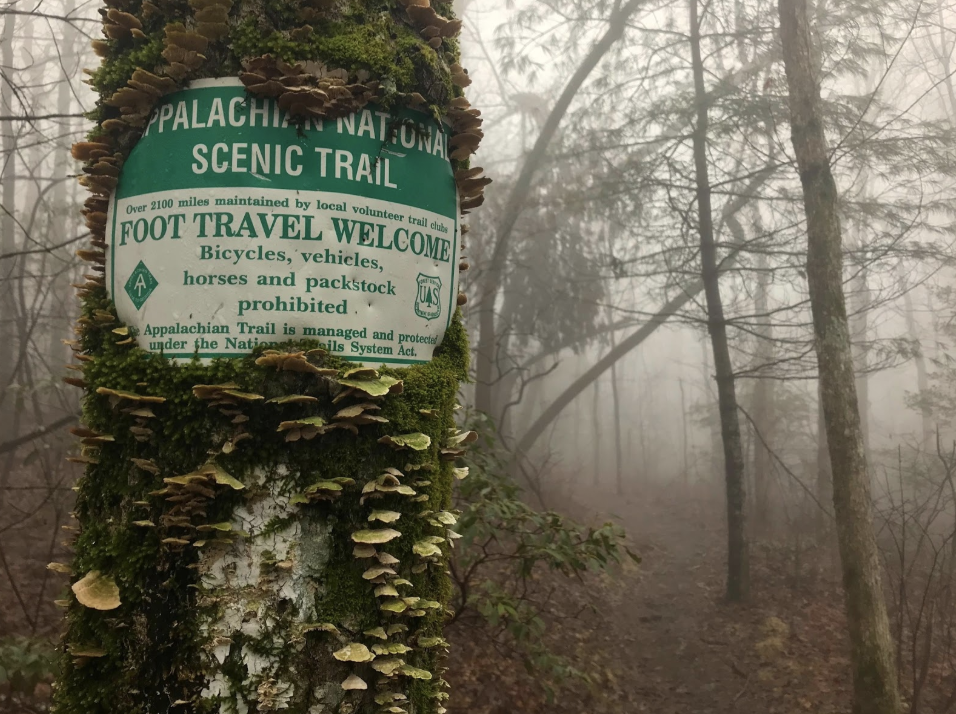 In 4 days I had two instances of trail magic, which were such a surprise and so kind that I was really quite touched. A thru hiker from last year who lived in the area hiked up and over Blood Mountain in the howling winds and rain just to bring some fresh fruit and candy to us in the shelter before hiking back that night. Then, the shuttle driver who took me from my endpoint at Hogpen Gap back to Amicalola wouldn’t let me pay for my ride because he’d enjoyed our conversation and said he loved helping hikers out. I completely understand why faith in humanity is restored on these trails. 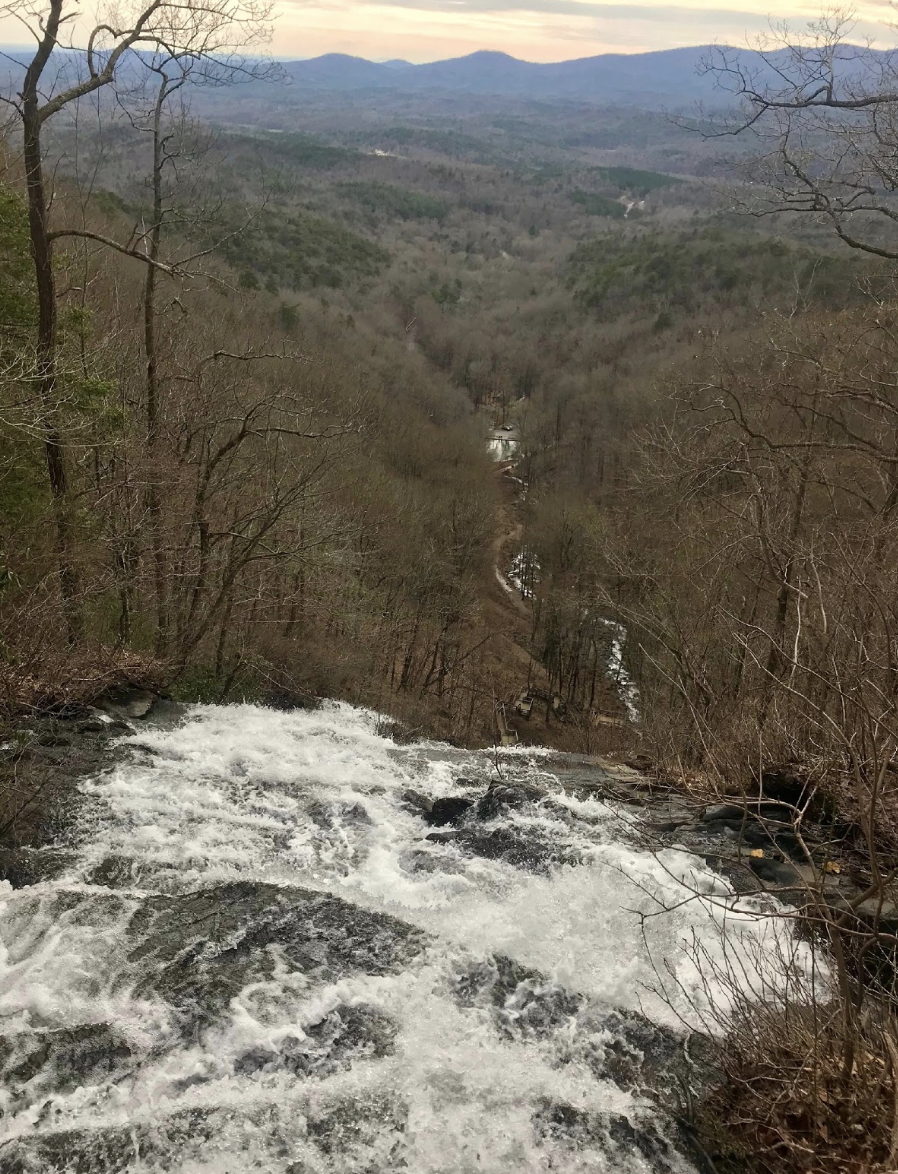 This section ended up being an incredible confidence builder for me. I realized that all the research and investment into lightweight gear has paid off. Even in terrible weather, I can enjoy myself out there. Being alone is a peaceful, necessary experience for me. And most of all, I have the strength inside of me that is needed to continue chipping away at sections of this trail until I’m able to complete it. When I was saying my goodbyes to the hikers I’d met, one of them said, “I hope you get to do a thru hike someday.” And I replied, “I’ll be happy if I’m ever able to say I’ve completed the trail, no matter how long it takes.” 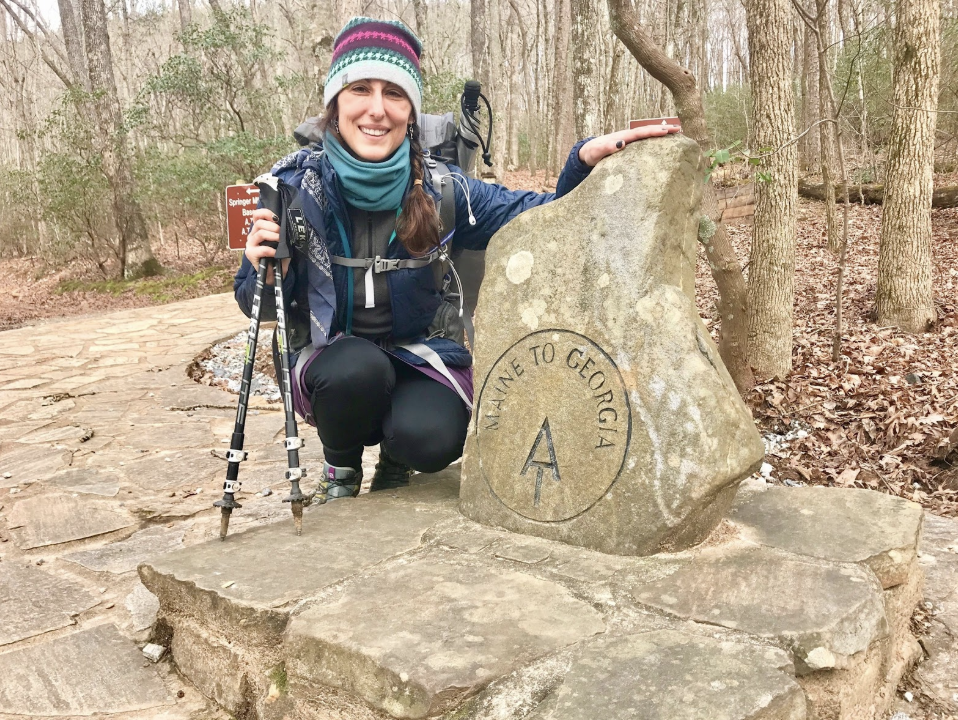 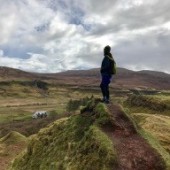 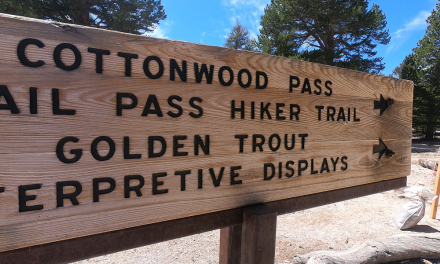 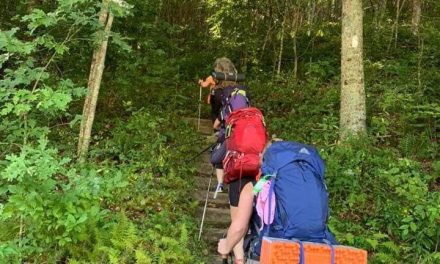 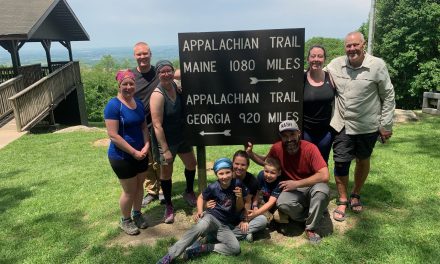 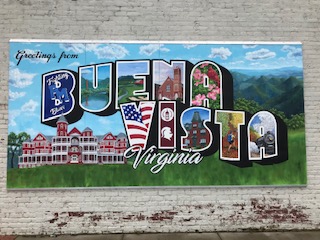